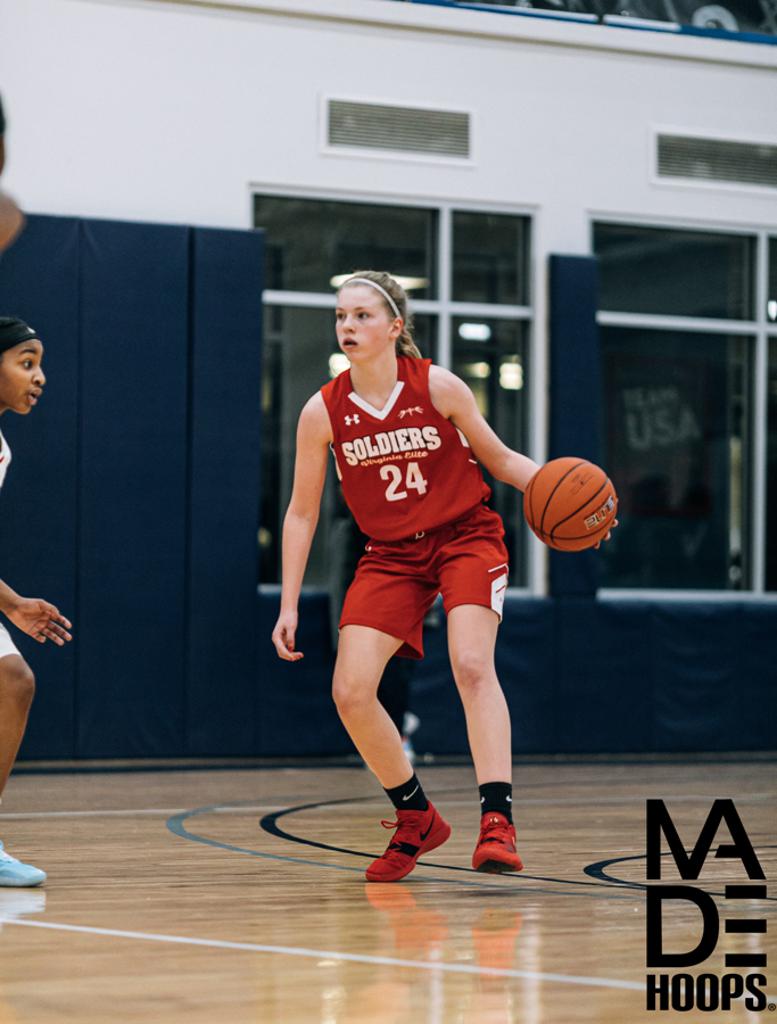 Nadeya Regala, DC Premier: Prime sharpshooter from three. Has a quick release and can shoot the ball from anywhere on the floor. She anticipates well on the defensive end of the floor.

Leah Harmon, Dream Team: A true floor general with a NYC flare to her game. She can get to the rim well. She can shoot it off the dribble. Good rebounder on the defensive end of the floor.

Emma West, FCBA: She is one of the toughest players in the division. Has a real drive to win. She is constantly all over the floor winning 50/50 balls. Runs the floor and finishes in transition and can rebound both sides of the ball.

Kennedy Umeh, MD Belles: A forward with a varsity level frame. Can finish well both on the low black and on the high post. Soft touch on the fifteen footer. She is consistent from the foul line. Rebounded tremendously on the offensive end.

Jess Aponik, Mid Atlantic: High IQ guard that can knock down the three. Really executes well off of screens. Tough underneath against bigger players, strong rebounder on both sides of the floor.

Hope Masonius, NJ Belles: Combo guard that can play multiple positions on the floor. Efficient passer that will bring the ball up the floor on certain sets. Strong in transition, and consistent set shooter from three.

Mikaya Blake, NJ Cardinals: One of the most complete players of the tournament. Consistently finds a way to keep her team in games or get the win. She can score in a variety of ways, set shooter form three, can get to the rim, and has a solid pull-up shot. Rebounds the ball well on both sides of the floor. Great anticipation on the defensive end of the floor.

Mia Pauldo, NJ Sparks: The floor general. One of the strongest shooters in the league from long range both set and off the dribble. She is a strong on ball defender. Efficient passer in transition. Strong communicator

Destinee Salgado, Team Durant: Strong post player with good size. Will finish in the low post on both sides of the rim. Consistent free throw shooter. She has good timing on the defensive end of the floor blocking shots.

Maddy McDaniel, Team Takeover: There might not be a more complete player in the league than Maddy. Strong offensively, can score in a variety of ways. Great communicator. On the defensive end she is a great on ball defender, anticipates well in the passing lane. Efficient passer in transition. Rebonds against bigger players on both sides of the floor

Toby Fournier, UPLAY Canada: One of the most impressive newcomers to the league. Long & athletic with great ability to get up. Is able to rebound on both ends of the floor, and has the ability to score way beyond her years. This strong combo player will throw down a dunk before the season is done!

They are one of two teams to make it through this weekend undefeated. Ultimate competitor Emma West is a big reason why. She does all the little things that really help teams close out games. Post player Camille Pomeroy is really a blue collar player rebounding and getting putbacks off of just working really hard. Sharpshooters Sierra Gutierrez and Idinah Williams Baffoe knocked down shots from long range for this club. Hope Drake is a combo player who can knock down shots from fifteen feet with consistency and gets into the passing lanes on defense. This club will look to build on session one going into DC.

The only other team to make it out of session one undefeated was Team Takeover behind the play of Madisen McDaniel. Madisen is a high IQ guard that does things way beyond her years. At times she put the team on her back to get the win. She is the most efficient scorer in the league. In the backcourt Saniyah King is an unsung hero for this club. She sees the floor well and is able to find her teammates in spots they can score, and truly is a strong on ball defender. Kyndel Walker is a combo player for this club that is an athlete. She really works hard and hustles on many plays. This club will have the stands packed as they make their way home to DC for Session II and will look to stay undefeated.

Teams To Watch Heading Into Session 2...

Falling short in one game, this club was near perfect in Session I. They have a lot of pieces and a high IQ as a team that could see them continue to rise in the standings as the sessions go on. Devyn Quigley is a quick guard for this team that reads the defense really well. She almost always catches the open cutter on the offense and is a great set shooter from three. Hope Masonius is one of the strongest players in the division and she works hard and fills the stat sheet in all categories. She rebounds the ball well and starts the transition right up the court. She has strong handles, and an impressive mid range game as well, and can shoot it from three. Taylor Derkack is a combo player with good size and is an efficient shot from long range. She sees the floor well and is a difference maker on 50/50 balls. This club will look to continue to climb the standings going into session II.

The record here definitely does not define this team's ability. As the sessions go on and they grow learning to complete games they will be dangerous. Milia Holloway and Kaylee Carson are really two strong defensive minded guards. They apply pressure on the press and cause many errant passes. Both move the ball well on offense and can shoot it from deep. Maya McCorkle shoots the ball well for this club and can really elevate in the paint. She has a nice midrange shot and turns the corner well to get there. A quick first step gets her to the rim when isolated. This team needs some runs to go together in the next session and will climb their way up the standings.

Hailing from Canada, this team is one of the strongest teams. Although they have one loss this will still be a team that will find themselves toward the top of the standings come March. Leading the way for this club is Toby Fournier. This league has yet to see a player like Toby. She can really elevate to the rim, touching backboard in the open court on fastbreaks just about every time. We might see a dunk from this young lady before the season is over. Maya Anderson is a long athletic combo player that anticipates well on the defensive end getting into the passing lane. Kiera Naval is a strong shooter for this club knocking it down from long range both off the dribble and set. This team capitalizes well in transition, and fights hard on the boards. Looking forward to seeing their growth as the sessions progress.