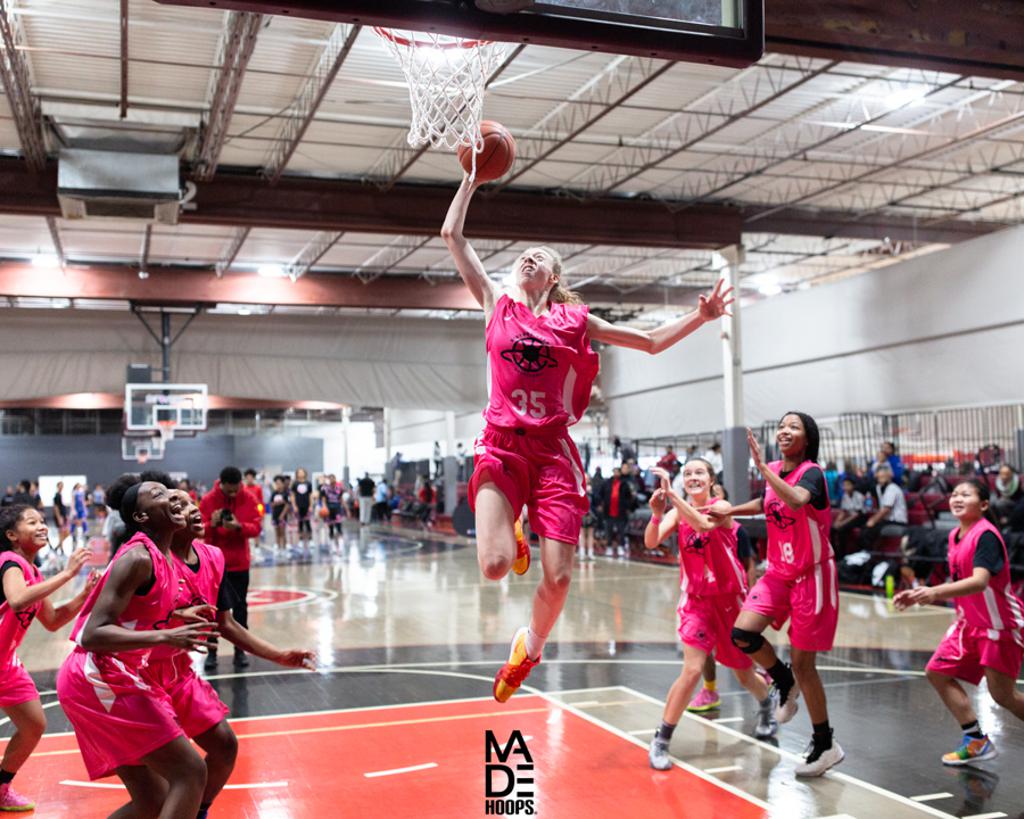 Ella Brown, BWSL Red Tide: A true leader, she is a vocal presence on the floor. She has the ability to shoot the ball well from three and plays hard on the defensive end. Sees the floor well.

Hope Drake, FCBA: Long and athletic, she gets into the passing lane on the defensive end of the floor. She finishes well around the rim. She rebounds the ball on both ends of the floor.

Kaylee Carson, Grind Girls: Strong lead guard. Sees the floor well. Passes the ball inside in the half-court, putting teammates in position to score. Gets to the rim, & finishes. Consistent free-throw shooter.

Jasmine Davis, MCW Starz: Post player with rebounding ability on both ends of the floor. Great court vision to start her team’s transition. Consistent inside finishing on both sides of the rim.

Talyah Walker, MD Belles: Hard-working off guard Is the first to the loose ball. Pushes the ball and sees the floor. Has a quick first step and can get to the rim.

Aaliyah Taylor, MD Shooting Stars: Long and athletic combo guard with great anticipation on the defensive end of the floor. Strong to the rim. Rebounds the ball well on both ends of the floor.

Jessie Aponik, Mid Atlantic Magic: One of the toughest players in the division, she is always battling. Efficient scorer can shoot the three, strong one dribble pull up & finishes at the rim.

Danielle Williamson, New Heights: Quick release, high-efficiency shooter. Knows how to get herself open. Can shoot the three off-the- dribble and in transition. Strong on-ball defender.

Taylor Dendrik, NJ Belles: One of the most exciting players to watch. She has a high IQ, great understanding of the game. Finds teammates in transition. Great anticipation to the ball. Knows how to score off the screen.

Mikayla Blakes, NJ Cardinals: Continues to be a strong competitor for her club. Strong scoring ability, always finds a way to put the ball in the basket. Finishes put-backs, consistent free-throw shooter. Displays a great first step to get into the paint for a pull-up.

Toby Fournier, UPLAY Canada: One of the most athletic players in the division. Has the ability to really get off the floor. Finishes at the rim and in transition. Consistent free-throw shooter. Ability to dunk the basketball.

Madisen McDaniel, Team Takeover: She is one of the most exciting players to watch. High level, high IQ, she is the most complete player in the league. Efficient passer and scorer. Great communicator.

They came into session II ready to win. Led by Ahnay Adams, this team really has all the pieces. She is a strong IQ lead guard who can see the floor. Jasmyn Cooper is a combo player who can get out and score, and she rebounds well against bigger players. Jasmine Davis is one of the strongest post players finishing all around the rim, while not allowing anyone in the paint on the defensive end. This team plays hard every play and will look to continue to climb the standings.

The undefeated record continues for the team from the DMV. Led by one of the most complete guards in the league, Madisen McDaniel. She plays with skills way beyond her years. Kyndel Walker continued to work hard and find ways to really help her club, many of which don't show up on the scoresheet.

Mikayla Blakes, Morgan Matthews & Chloe Escanillas might be the strongest three guard front in the division. All three see the floor well and move the ball. They score well in the results and in transition. On the defensive end of the floor, the team moves as one getting into the passing lanes and turning defense into offense.

This team had a very strong showing in session II. Kennedy Umeh is a strong post player that finishes around the rim. Tatum Greene is an athletic combo guard who is so strong on both ends of the ball. Talyah Walker is the glue for this team, doing all the little things that don’t always show up in the stat sheet. This team will be a force going into the second half of the league.