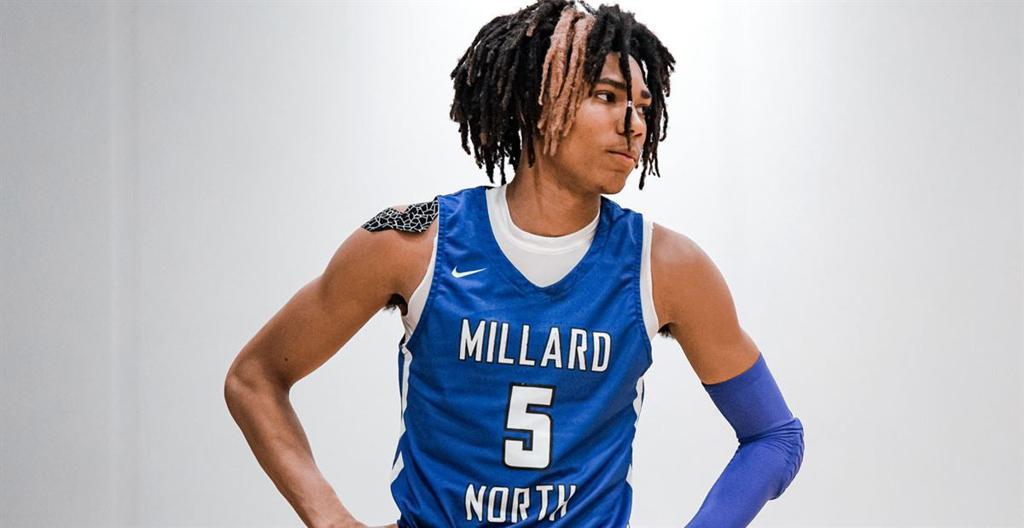 The event planners of the Soldier 24 Elite Showcase wasted zero time giving the best matchup of the day between Hunter Sallis who is rated #1 and Chucky Hepburn is who rated #2 in the state of Nebraska. You could feel the energy between both players as they both took on the challenge of guarding each other for the majority of the game.

Hepburn, who impacted the game in a multitude of ways, was breathtaking to watch as he was composed pulling up from 30 feet two times and hitting nothing but the bottom of the net. He was very poised in getting others involved and not forcing any bad shots, and showcased his incredible vision and highlight passing ability. He also has an incredible pace and knows where teammates are, which helps elevate them to making plays because he knows where they should be and will find them. Hepburn also showed he can finish around the rim well both hands.

Hunter Sallis, who was dominant in his own right, showcased his impressive athleticism and tenacity to attack the cup. He stands at 6’4 with a very lengthy wingspan which allows him to get deflections and make plays in transition. Sallis has a solid handle which allows him to get to his mid-range which is very effective for him and one of the best parts of his game. Something that stands out about his game is the wiggle he has finishing around the basket, and he has a nice floater game that he can get over most defenders in the lane because of his length.

Sallis and Hepburn have been friends since around 2nd grade when they started off playing with each other then began competing against one another, which has brought out the best in both of them. Their most recent battle between them before Soldier 24 came at the Class A state Championship where Hepburn’s Bellevue West team captured the title over Millard North 64-62.

Sallis said, “ I think I will release a top 6 schools really soon, then probably a decision coming this spring.”

Sallis spoke about his relationship with Chucky Hepburn and how it feels being the two top guys in the state.

He said, “We started off playing for the same team, then about my 8th-grade year we split  apart, but I feel we elevate each other’s game every time we play. We go at each other and then after are really good friends, so he brings a little extra fire out of me. It feels good knowing the hard work we both have been putting in is paying off. I think right now we both are just really grateful and humble for the opportunities that have been provided to us.”

Chucky Hepburn is a point guard who attends Bellevue West High School. He is rated as a top 150 player nationally and is verbally committed to the Wisconsin Badgers. He gave the Badgers his commitment on September 29, 2019. Hepburn spoke on why he shut the process down early, as he said “Wisconsin is a good fit for me, since they play through their guards. The minute I stepped on campus I fell in love with it and no other school game me that feeling.”

Hepburn talked about his relationship with Sallis, said “ We’ve been close for years. Every time we step on the court we know eyes are on us. We try our best to show out but also push each other because we both want to make it to the league. For both of us to be the top players in the state is something we’ve always dreamed of. We know that other people are working hard to compete with us so we are always grinding to stay ahead of the competition.”

2021- 6’3/ SG: Kwat Albdelkarim attends Lincoln North Star. Albdelkarim was making plays all over the floor but he shined with the way he shot the three-ball. He showed the ability to be a crafty passer and make plays in transition. He could be a steal for a low-major division one or division two program.

2021- 5’11/PG: Cameron Binder attends Auburn High School. Binder was tough as nails all day competing. He showed the ability to get to his mid-range and three-balls off the dribble. He plays the game the right way although he is undersized.

2021- 6’7/ F: Tyler Sandovall attends Millard North. Sandovall was active all day, he did a good job of running the floor, getting put-backs for his team, and showed the ability to stretch out and hit the three when he was open. Not super athletic but he made up for it with the motor he displayed and keeping plays alive.

2021- 6’3/ G: Maijhe Wiley attends Creighton Prep. Wiley looks to be a young man that seems like a late bloomer but has a solid game and skillset. It’s not one particular thing he did great but he was consistent and did some things well. His jumper looked fluent and off the dribble, he made some good looking plays.