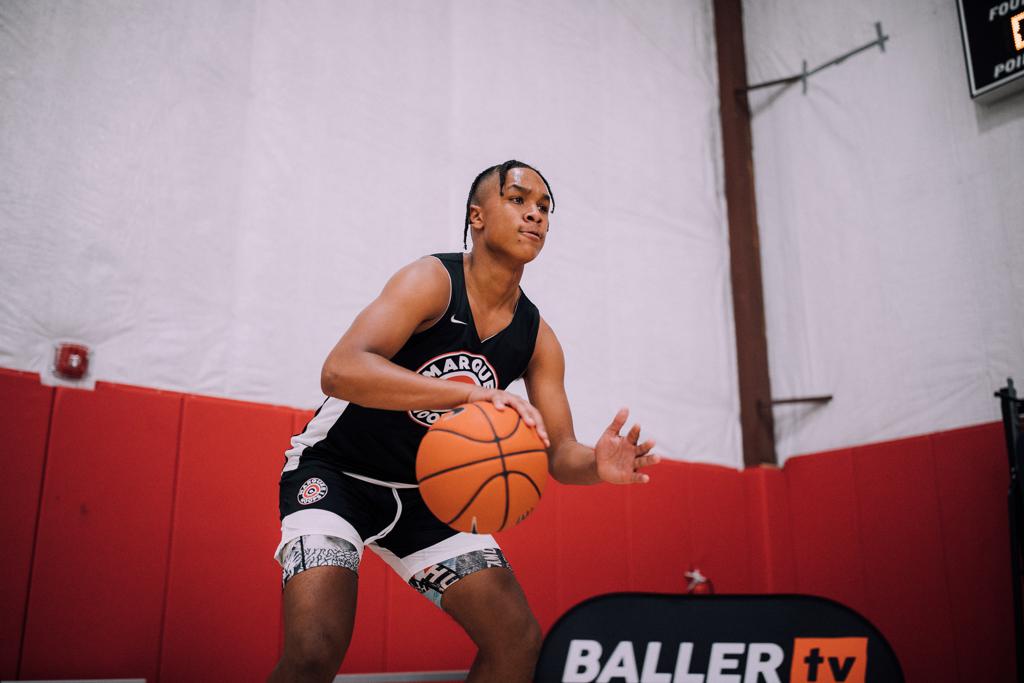 Marquee Hoops 'Make Your Marq' Camp gave us a glimpse of the future of grassroots basketball this past weekend. On the middle school side, the class of 2025 was impressive at the event, showcasing prospects from across the country. Below are my standouts from the event.

Jaysean Williams, 2025 PG: One of the quickest and craftiest lead guards, the high point of Williams’ weekend came when he hit the game winning three in overtime to close out camp. Williams is someone to keep an eye on thanks to his speed and ability to change directions.

Shemar Jones, 2025 WF:Jones should be one of the top returning players in this year’s West Lea8ue and he made that clear on the way to a camp championship this weekend. A big and physical slashing wing, Jones showcased the ability to guard multiple positions as well as being able to create his own offense.

Christian Thomas, 2025 CF: Few players were able to match Thomas’ intensity throughout the weekend.  A big and physical combo-forward, Thomas was able to score around the rim, as well as face up and attack opposing bigs off the dribble. Once he improves his ball handling ability there’s a chance he can play on the perimeter full time, where he will be even more of a mismatch issue.

Jordan Ghee, 2025 CG:  A quick guard who showed the ability to play either guard spot during the weekend, Ghee appears to have a bright future ahead of him. He knocked down a number of threes both off the dribble and in catch-and-shoot scenarios.

Kahlil Samuel, 2025 CG: Ghee’s backcourt partner for the weekend, Samuel was seemingly a perfect compliment. He’s got a good frame and was able to use his strength and quickness to get into the lane and either finish at the rim or find the open man. He showcased advanced vision and ball-handling skills for his age.

Alex Lloyd, 2025 WG: Simply put, Lloyd was one of the top perimeter prospects in the entire camp. He was able to play all three perimeter positions and looked more than capable of guarding bigger players as well. His versatility, length, and ability to put points up in bunches should put the Miami native in the conversation as one of the best 2025s in the Southeast, if not the country.

Finley Billy, 2025 WF: One of the most skilled forwards in the entire camp, Billy is the ideal combo forward for today’s games. During camp, he was used a bit as a stretch-four due to his size and length, but his perimeter skills are what make him an exciting long term prospect. As long as he continues to develop his ball-handling and quickness, Billy should be a big wing that’s highly coveted by the time he hits the college ranks.

Jaquan Womack, 2025 F: Another physical combo forward, Womack was one of the most imposing bigs to attend camp this weekend. A good rebounder with the ability to knock down the open three pointer, once he improves his ball-handling ability he should be a mismatch nightmare.

Mike Green, 2025 CG: Green was able to stand out thanks to his high skill level, shooting and ball-handling ability. A quick guard who is capable of creating his own shot or creating for others, Green’s basketball IQ is another reason to be high on him in the long-term.

Austin Spencer, 2025 CG: Coming off a Red Lea8ue Championship, the NY Lightning appear to be in good hands with Spencer. A sweet shooting combo-guard who has a quick first step and the ability to attack the rim, Spencer looks like he should be one of the top guards going into this season.

James Greenhoward V, 2025 SG: One of the most energetic defenders and slashers in camp this past weekend, Greenhoward brought the kind of intensity that makes guys stand out regardless if they’re scoring the ball or not. A quick first step allowed him to get into the lane with relative ease throughout the weekend.

Adam Oumiddich, 2025 SG: A long and lanky shooter with some creation ability, Oumiddich showed some flashes of offense that suggest he will be on division one program’s radars sooner rather than later. There’s a lot of upside to his game and once he starts being more productive, look out.

Judah Hildago, 2025 PG: Team Final has always had high level floor generals in the Lea8ue and with Hildago set to take the helm this season, it appears this year will be more of the same. Big, powerful, and skilled; few players in the northeast can match the polish Hildago possesses offensively. His ability to get to his spot and take any shot he wants is something that will keep him in the conversation as one of 2025’s elite members.

Tyrone Beatty, 2025 WF: A native of Oklahoma, Beatty looks like he will be one of the best prospects coming out of the Sooner state in his class. A strong and athletic wingman, Beatty was at his best when he was going to the rim. He has a good amount of defensive versatility and the kind of build that suggests that he will grow quite a bit more before college.