MADE Hoops 2021 Middle School East Coast Academy gathered some of the top talent in the country to Pitman, New Jersey last weekend, bringing together a highly competitive camp run by top tier coaches. The camp had a lot of prospects who brought attention to their name, and others who continued to perform well after their MADE Hoops circuit seasons. Players from all over the nation competed on a high level to showcase their skills. Here's who caught my attention... 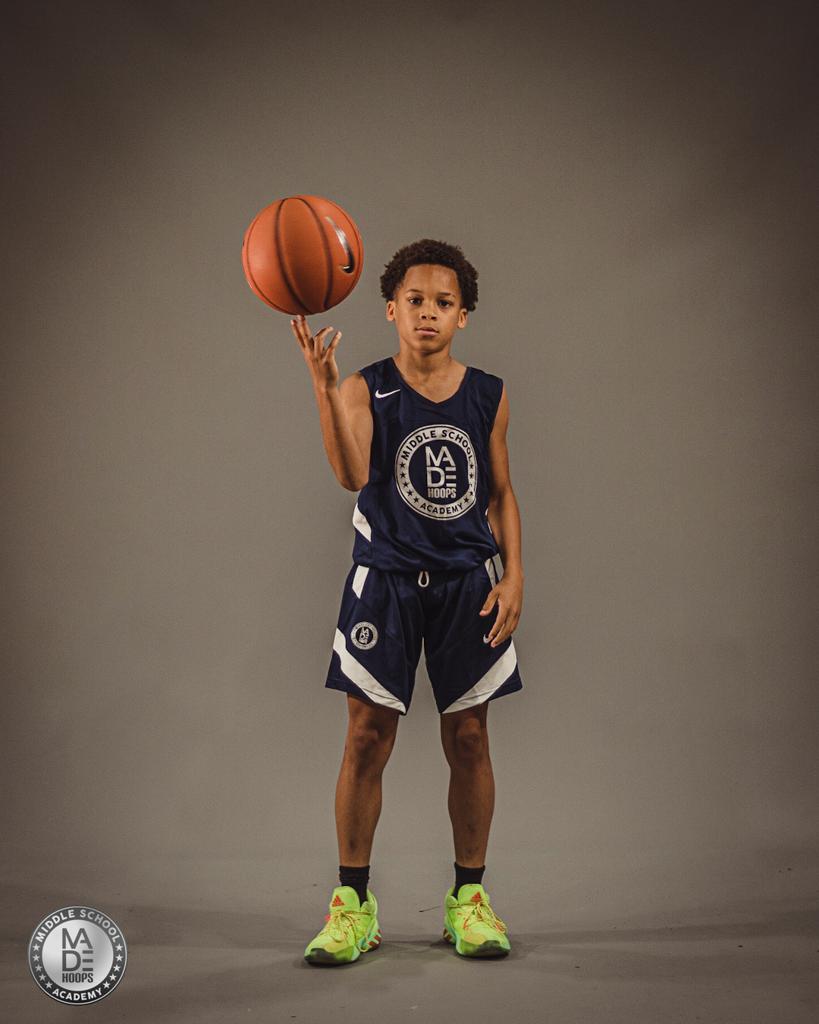 Omari Moore, 2025 G, New Jersey: Moore is a super athletic guard, who did a little bit of everything on day one.  He's a standout slasher who gets to the rim and finishes well through contact/traffic. He has good size and length for his position, which he uses to an advantage on defense causing turnovers. Moore also showed flashes of his ability to knock down shots from 3-point range.

Kavon Simmons, 2025 PG, New York: Simmons was a standout shooter from the start, especially off the catch.  He's an impressive defender who possesses top tier lateral quickness. He moves off the ball to look for catch and shoot opportunities. He loved to take the ball coast to coast himself, or find an area to spot up in for an open 3-point shot.

Dillon Callahan, 2026 SG, New York: The left-handed wing showed off his full offensive arsenal. Callahan can score at the rim, with his left hand especially. He showed a high IQ, knowing when to pull up for a mid-range shot. A standout shooter from 3-point range as well. He was not only an offensive talent, as he rebounded at a high level all weekend long on both ends of the floor.

Chandler Kennedy, 2025 PG, North Carolina: Kennedy was a true floor general who stood out with his team impact. He controlled the tempo, displaying his IQ of knowing when to push the ball or not. He's a crafty guard who gets in the lane looking to pass, score at the rim, or take a floater. On the defensive end, he was wreaking havoc with his uptight pressure.

Derrick Robinson Jr., 2026 G, Maryland: A tall and athletic guard who was a tough cover all weekend. Robinson Jr. can score at the rim, or knock down jump shots around the floor. An impressive defender, he guarded multiple positions throughout the weekend. He has the ability to take the ball coast to coast, or beat defenders running down the floor for an easy layup.

Cameron Ward, 2025 Forward, Maryland: Ward was a two-way standout prospect, with the way he impacts the game in multiple ways. A versatile forward who posted up smaller defenders, or blew by bigs to score at the rim. He is a standout rebounder on both ends of the floor, always having a high motor. Defensively, he caused multiple turnovers being at the top of the press utilizing his length to his own advantage.

Jamier Hopkins, 2025 G, Maryland: An athletic guard who plays in attack mode. Hopkins uses his tight handle and athleticism to get into the lane. He controlled the tempo for his squad, while playing uptight defense on the other end of the floor. Hopkins showed off his ability to shoot the ball, with multiple catch and shoot 3-point makes.

Adam Conheeny, 2026 G, Rhode Island: Conheeny did a little bit of everything. Offensively he scored at the rim, knocked down jump shots, or looked for drop down passes to an open big. He's a crafty guard who shows impressive court vision, displaying his high IQ. Defensively, he showed unmatched effort with his active hands and feet. A prospect to remember who has a versatile skillset for his age already.

Brenden Hamilton, 2025 G, New York: A physical and athletic guard who was a standout slasher. Hamilton uses his frame to absorb body contact and finish strong at all times. He knocked down outside shots, off the catch or dribble. Defensively, Hamilton is laterally quick which allows him to guard multiple positions. With his frame and skillset at a young age, he is a prospect to keep an eye on.

Jason Mandaquit Jr., 2025 G, Hawaii: JJ was extremely impressive with his IQ from the start. He had next level court vision, dropping dimes all over the floor. He had a solid handle, and showed his ability to finish at the rim. He also knocked down some mid range and 3-point shots throughout the weekend. Defensively, he was a gritty player who never stopped applying pressure until the final buzzer.

Milan Dean Jr., 2025 Wing, Pennsylvania: Milan stood out with his three-level scoring abilities. A freak athlete who threw down multiple dunks, yet had the ability to hit shots from the perimeter. Defensively, he used his athleticism to an advantage, always staying in front of his opponent. Dean Jr. showed a high motor rebounding, constantly going after any miss on either end of the floor. A prospect to certainly remember for the high school level.

Alijah Cooper, 2026 G, Pennsylvania: Cooper was very efficient showing off his game, whether it was in drills, or games. A lengthy guard who scores in multiple ways. He can get to the rim, and use his length as an advantage, or knock down shots from the perimeter. Cooper knew how to use his length as an advantage defensively also, being able to stuff passing lanes to force turnovers. He loved to push the ball in transition, especially after forcing turnovers.

Isaiya Branch, 2026 G, Virginia: Branch was a crafty guard all weekend, with a knack for scoring the ball. He used his tight handle efficiently to get into the lane looking to score. Branch showed the ability to pass the ball as well, displaying his court vision. He finished in a variety of ways, whether it was a floater or acrobatic layup. He stood out with his perimeter shooting, off the dribble especially.

Andrew Chobor, 2025 G, New Jersey: Chobor showed off his game in a variety of ways. He showed his ability to shoot the ball off the dribble or catch. Chobor is a high IQ player who is always moving without the ball looking for catch and shoot opportunities. He's a  talented slasher who is agile for his size, with a quick first step. He showed his versatility, being able to get to the rim and finish strong.

JT Lindi, 2026 G, New Jersey:  JT was a knockdown shooter from the mid-range area and 3-point range. A crafty lefty who could score in multiple ways. He could get into the lane and finish at the rim. Lindi also stood out with his floaters in the lane. He knows when to kick the ball out in traffic, showing his high IQ. Defensively, he was a hard worker who applied constant pressure.

Amare Cooper, 2026 G, Virginia: Cooper was a versatile guard who stuffed the stat sheet. He had an impressive handle for his size, with the ability to get to the rim. He finishes strong through contact with either hand. He could shoot off the dribble in the mid range area, and hit 3-point shots off the dribble or catch. An intriguing prospect with tons of upside due to his versatility.

Silas Etienne, 2026 G, Massachusetts: Silas presented a well rounded skillset for a guard. He could finish with either hand or strong through contact. Etienne had a high motor rebounding the ball on both ends of the floor. An agile guard who can blow by taller defenders. Silas was a high IQ player, knowing when to seal position against smaller defenders. He showed an impressive handle on day two, being able to get to the rim or take the ball coast to coast in the open floor.

Liam Gendron, 2026 Forward, New York: Gendron is a physically advanced prospect, who uses his frame to his advantage. He posts up smaller defenders, and finishes strong at the rim. Defensively, he uses his frame to box out and go after rebounds. He is a high motor rebounder that goes after any miss. With his advanced physicality and finishing abilities, he is a prospect who shows major potential.

Jaylen Harrell, 2025 Wing, Massachusetts: Harrell was a versatile player who stuffed the stat sheet all weekend. Offensively, he posted up smaller defenders, or blew by bigs. He showed a promising face up game, knocking down mid range jumpers. Harrell played as a “glue guy”, doing everything he could to help his team. Defensively, he was a standout rim protector with his ability to block shots and rebound.

Jacob Ross, 2025 Wing Guard, Virginia: Jacob uses his athleticism to an advantage. He is a talented slasher with a solid handle, and he finishes at the rim strong. Ross is also standout shooter from the perimeter, being able to shoot off the dribble or catch. He stood out in multiple ways, whether it was his athleticism or scoring abilities. With his athleticism and all around game, he is a prospect to keep an eye on.

Aidan Knight, 2026 Guard, New Hampshire: Knight was a high motor guard who never stopped working on both ends of the floor. Offensively, he hit tough shots off the dribble, or blew by defenders with his impressive changes of pace. Defensively, he applied constant uptight pressure  to disrupt the flow of the opponents offense. Knight was lightning quick in the open floor, using his tight handle and changes of pace to take the ball coast to coast. Defensively, he was a gritty player who rebounded the ball at a high rate.