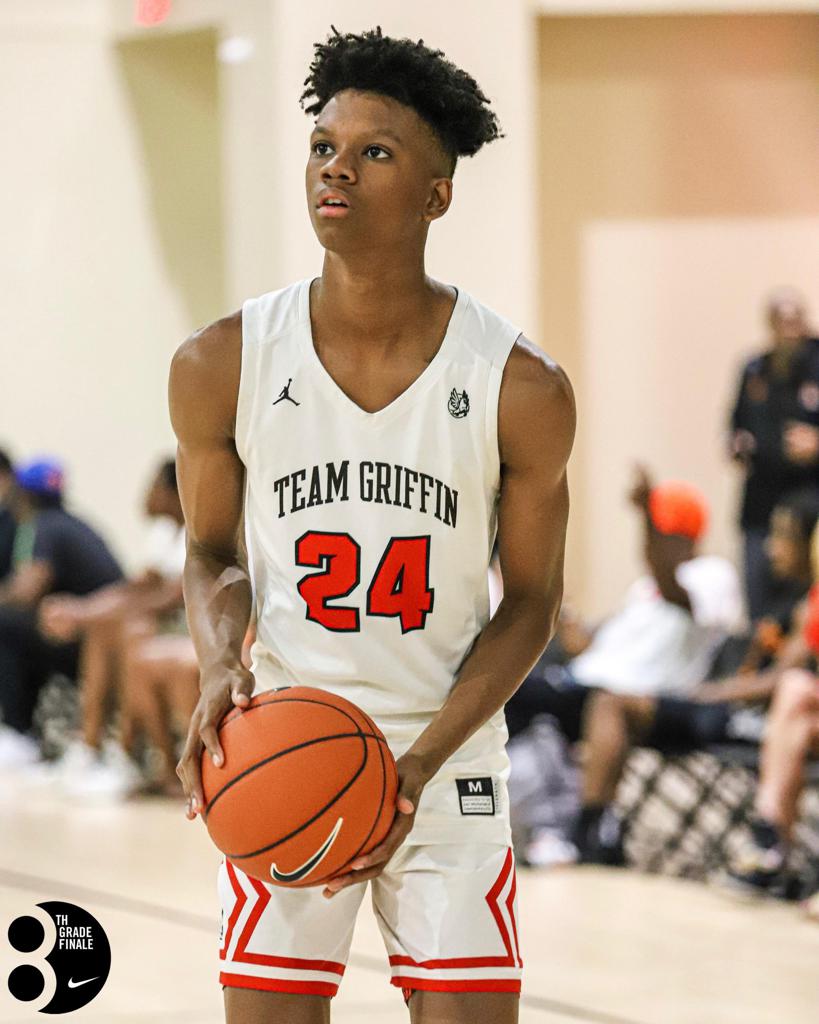 Kaidon Rayfield, 2025 Forward, Team Griffin: Rayfield was a lengthy, versatile, and athletic inside-out scoring threat. He posted up smaller defenders, blew by slower forwards, and stretched the floor from three-point range. Rayfield has the versatility to be a threat in the pick and roll or pop. As his outside shooting and ball handling continue to improve he’ll be a prospect to keep an eye on.

Kanard Turner, 2025 Guard, Woodz Elite: Turner is a crafty and smooth left-handed guard who can score in bunches. He’s lengthy, quick with the ball in his hands, and has the ability to create a good look for himself or others. He showed off a good touch around the rim, knocked down pull-up mid-range shots, and hit three-point shots. He was constantly moving without the ball looking for open catch and shoot opportunities.

Massiah Stevens, 2025 Guard, 757 Hurricanes: Stevens stood out from the jump with his speed, dribble moves, and ability to score from all three levels. He got to the rim with ease, and showed elite changes of pace and bursts of acceleration. He penetrated the defense frequently, looking to draw help defense and kick out to open shooters. Stevens knocked down perimeter shots, controlled the pace of the game, and scored when his team needed a bucket.

Jalen Grant, 2025 Guard, PSA Cardinals: Jalen showed off his ability to impact the game in more than one way on day two. He facilitated the offense, created space off the dribble, and got in the lane when it was open. He finished at the rim with either hand, through contact, or through traffic in the lane. Defensively, he showed impressive lateral quickness forcing turnovers at the top of PSA’s full-court press.

Kai Wade, 2026 Guard, Carolina Heights: Kai was a great passer, and he was a nightmare for opponents to contain in the pick and roll. He could get into the lane, create space for a shot, or find an open teammate after drawing help defense. He knocked down multiple shots off the dribble from mid-range and three-point range. He had a tight handle along with standout dribble moves that got him to his spots on the floor.

Ezekiel Graddick, 2025 Forward, Georgia Wildcats: Despite a loss today, Graddick showed flashes of the potential he holds. He’s an athletic, lengthy, and mobile forward who more than handled his own today. He ran the floor, rebounded on both ends, and protected the paint by blocking shots. Offensively, he scored in the post and on the drive, using his height and length to his own advantage.

Shawn Spencer, 2025 Guard, NJ Legacy: Despite a tough loss to Bates Fundamentals, Spencer had a solid performance today. He had top tier bursts of acceleration that got him into the lane and at the rim. He could finish through contact, traffic, or acrobatically around defenders. Spencer did a great job setting his teammates up for good looks, and he knows when to kick the ball out in the lane.

Anthony “Ty” Glasper, 2025 Guard, NYBA: Glasper was a downhill, attack-mode, and physical guard who thrived at getting to the rim. He finished through contact noticeably well, and drew fouls getting himself to the free throw line often. He was key in NYBA’s press, applying pressure and forcing turnovers to push the ball. As his perimeter game continues to develop he’s a prospect to keep an eye out for.

Trevor Best, 2025 Guard, Team Trezz: Best was a standout from start to finish with his physicality, skill, and athleticism. He controlled the tempo, directed the offense, and set himself up in isolation situations to score. He scored on all three levels today, getting to the rim, knocking down pull-up mid-range shots, and hitting shots from three-point range. Best was a very impressive rebounder for a guard who played with a high-motor.

Peyton Wiggins, 2025 Guard, E1T1 Vipers: Peyton was vital to E1T1 Vipers offensive success today on day two. He controlled the tempo, distributed the ball, and scored in a variety of ways from all three levels. He read the pick and roll very well, getting himself to the rim, pulling up for a shot, or passing to the screener. Defensively, he forced multiple turnovers and turned them into transition points.

Mike Carpenter, 2025 Guard, Norcross Heat: Carpenter was a lightning-quick, shifty, and crafty guard that hurt the defense all over the floor. He could get into the lane, create his own shot, or operate in the pick and roll. He drew fouls frequently, and did a good job absorbing contact going up strong. He was able to create space off the dribble and knocked down shots from mid-range and three-point range

Armoni Portis, 2025 Guard, D Rice: Armoni was a complete three level scoring threat that scored in bunches on Day Two. He moved without the ball, took advantage of poor closeouts, and finished at the rim in a variety of ways. He had a quick first step that got him into the lane at his own will. He was able to finish through contact, traffic, or kick the ball out when he drew help defense.

Kam Williams, 2025 Guard, Carolina Celtics: Kam is a scrappy, crafty, and downhill guard who showed some great flashes of his potential in the first two days. He has a tight handle and a quick first step he uses to get into the lane. He looks to score in the lane, at the rim, or kick the ball out to an open teammate on the wing. He is a perimeter threat too, knocking down a few three-point shots over the first two days of action.