MADE Hoops hosted the 2021 Midwest High School Academy Camp a few weekends ago in Lexington, Kentucky. Not only was there some top talent in attendance, but many sleepers were also discovered as well. Let’s take a look at some the weekend’s standouts from the class of 2022. 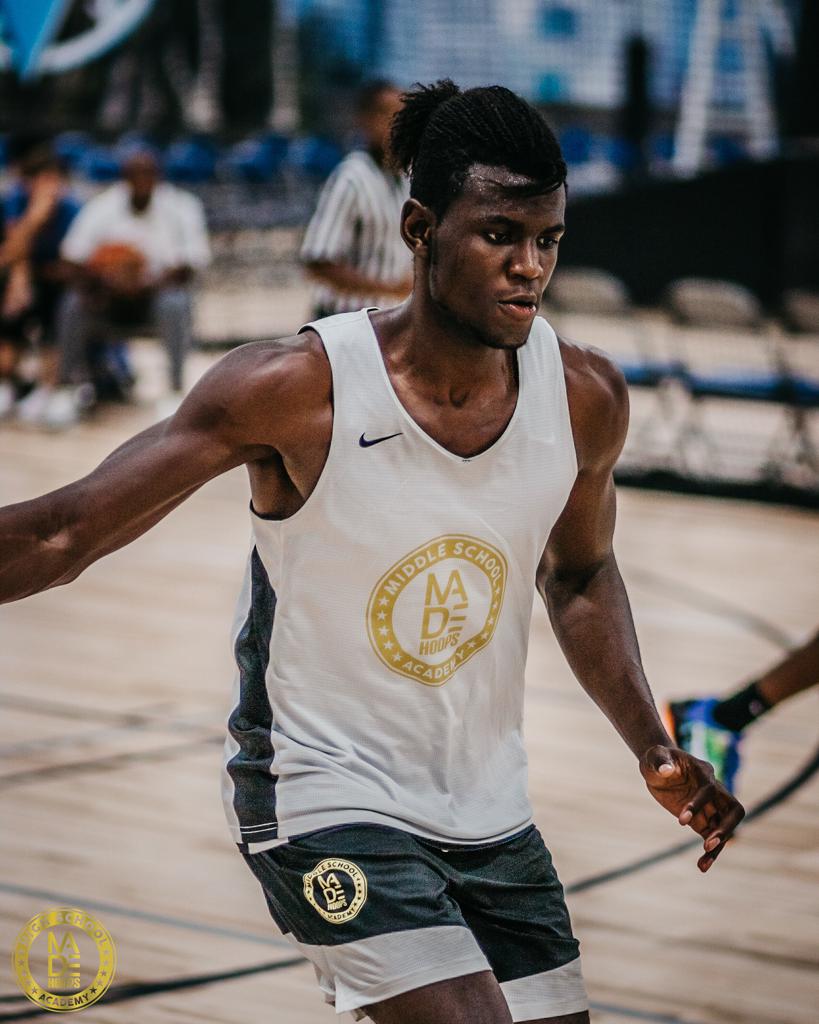 Jerome Beya, 6’9” Forward: Beya’s motor was very impressive to watch all weekend. He sprinted on every play, ran the floor on both ends, and tried to rip down every rebound and dunk every ball like his life depended on it. Beya’s strength was often unmatched and his ability to guard multiple positions was very notable. Beya’s lofty top-100 ranking nationally was definitely backed up by his play. It was a no-brainer to put Beya in the all-star game on Sunday.

Sam Powell, 6’7” Forward: Powell was very impactful in every facet of the game at Midwest HSA, and cemented himself a place in the all-star game on Sunday afternoon. At 6’7”, Powell took slower defenders off of the dribble, showcasing a nice handle and ability to get into the lane. His driving ability kept defenders on their heels, allowing him to knock down what seemed like a ton of shots from behind the arc.

Andrew Mason, 6’3” Guard: Mason’s three-level scoring ability was on display all weekend long, both in stations and game settings. He looked very comfortable getting to his spots in the mid-range, but was usually strong enough to get to the rim at will. His knack for confidently putting the ball in the basket from all areas of the court will translate to the next level.

Camden Pfeister, 6’4” Guard: Pfeister was one of the biggest stock-risers this weekend. His combination of top-tier athleticism and knockdown shooting ability really caught they eyes of a lot of people. He’s very confident on the court and impacts the game in so many ways. Pfeister went on many scoring flurries by himself and played great defense on some of the best players in the camp.

Robert Lewis, 6’8” Forward: Lewis was a constant source of energy for his team at both ends of the floor. He always seemed to come up with big rebounds and loose balls. His scoring ability and fluidity at 6’8” is probably what stuck out the most, scoring from all over the court and even handling the ball and pushing the break some.

Andrew Fuquay, 6’7” Forward: Fuquay’s ability to impact the game without scoring was impressive to watch (granted, he did his fair share of scoring as well). He would often guard the other team’s best player, sometimes initiate the offense out of the post and on the perimeter, as well as snag a ton of rebounds.

Isaac Garang, 6’7” Forward: Garang’s confidence was through the roof, as he scored time after time in the paint and confidently knocked down a couple of mid-range jumpers. His motor and ability to attack the glass awarded him with a ton of put-back looks for easy baskets as well. He showed nice touch within 10 feet of the basket and really liked going to his right-handed hook over his left shoulder.

Carter Bischoff, 6’0” Guard: Bischoff arguably had the best individual game of the entire weekend, scoring 30 points in one contest on high efficiency. He scored from all levels and also did a lot of his damage in transition. Carter always impacted the game both on and off the ball and always looked to get his teammates involved. Bischoff’s handle and passing ability really compliment his overall feel for the game.

Darien Lewis, 6’0” Guard: Lewis has always been known for being a high motor guy at both ends, and this weekend was no different. He was a defensive playmaker and was hard to keep out of the paint when he had the ball on offense. He’s a facilitating point guard that can also get hot in a hurry. Lewis made his teammates better and always set them up for success with crisp, accurate passes.

Austin-Rico Carr-Cole, 5’10” Guard: Carr-Cole’s craftiness was on full display this weekend. He always found a way to get paint touches and wiggle his way to the rim. He showcased fantastic lead guard skills as a facilitator, but was also able to go on individual scoring runs. His quick first step always had the defense on their heels, and he often made them pay with a pull-up jumper.

Kaden Warner, 6’1” Guard: Warner’s leadership skills were very impressive both on and off the court. He was the first one to encourage other campers whenever they made mistakes, but also directed his team on the court. He’s a strong, quick guard that was impossible to stop in iso situations. His combination of ball-handling and finishing ability was tough for opponents to defend.

Inslee Carroll, 6’1” Guard: When Carroll’s team desperately needed a bucket, he seems to almost always deliver. He showcased confident multi-level scoring and the defense had to account for where he was at on the court at all times. He showed craftiness when getting into the lane and had a nice array on finishing packages.

Jackson Twombly, 6’8” Forward: Twombly had one of the more impressive motors over the course of the camp. During stations, agility, and games, he was always going 100-percent and was one of the best rim running forwards in attendance. He was at his best scoring in the paint off of post-ups and put-backs, but Twombly also showed that he could step out and do things on the perimeter as well.

Brandon Rayzer-Moore, 6’4” Guard: When Rayzer-Moore was in score mode, everything he did looked absolutely effortless. He’s such a smooth athlete and just seemed to glide with and without the ball. He scored a lot in transition, but his jump shot from 15 feet and beyond is also a very strong tool in his arsenal. Despite being mostly a wing scorer, Rayzer-Moore also showed off some secondary ball-handler traits.

Keno Hayden, 6’4” Guard: Hayden’s strength when driving the basketball was sometimes second to none over the weekend. He loved to get down hill and always invited contact, oftentimes finishing through it. Hayden played both on and off the ball and had a big impact in both roles. He played at a good pace and was always patient in getting to his spots for scoring opportunities.

Deuce Wallace, 6’3” Guard: Wallace showed off some very crafty finishing in the lane this weekend. He scored with both hands from all angles around the rim, and was hard to keep from getting to the basket once he started getting downhill. Wallace also showcased a nice floater in the lane, which he smartly used when attacking much taller bigs.

Ethan Sellars, 6’1” Guard: Sellars was about as confident of a shooter as you would find this weekend. Every single shot he took, he thought it was going in. He can score off the catch, but he also scored off of pull-ups from rhythm dribbles. Sellars also did a fantastic job of attacking close outs.

Bryce Riley, 6’4” Wing: Riley’s strength and ability to get into the paint at will was very impressive to watch this weekend. He blew by slower defenders and posted up weaker defenders. Overall, he was a mismatch nightmare. Riley has a nice looking stroke from the outside and rebounds as well as a lot of the big men that were in attendance. His multi-level scoring ability didn’t go unnoticed.

Shaumba Ngoyi, 6’9” Forward: Ngoyi’s strength and motor were a very impressive skill set duo that he had on display this weekend. With strong hands and shoulders, he often snagged what seemed like every rebound in his area. Ngoyi also did a good job in protecting the paint as well as defending opponent pick-and-rolls. With good footwork and soft touch, he made a living from working in the post.

Hayden Ash, 6’0” Guard: Ash was very confident in catch and shoot looks, both in stations and in games. He did a great job of attacking close outs and showed the ability to put the ball on the deck with either hand. Ash went on spurts where he couldn’t miss, and his confidence seemed to be riding high all weekend.

JJ Louden, 6’5” Guard: Louden ended up getting a little banged up towards the end of day one, but he made his presence strongly felt before then. At 6’5”, he’s a big, strong guard that is comfortable scoring from anywhere on the court. Defensively, he’s a versatile defender that can match up with pretty much anyone at the high school level.