MADE Hoops hosted the 2021 Midwest High School Academy Camp a few weekends ago in Lexington, Kentucky. Not only was there some top talent in attendance, but many sleepers were also discovered as well. Let’s take a look at some the weekend’s standouts from the class of 2023. 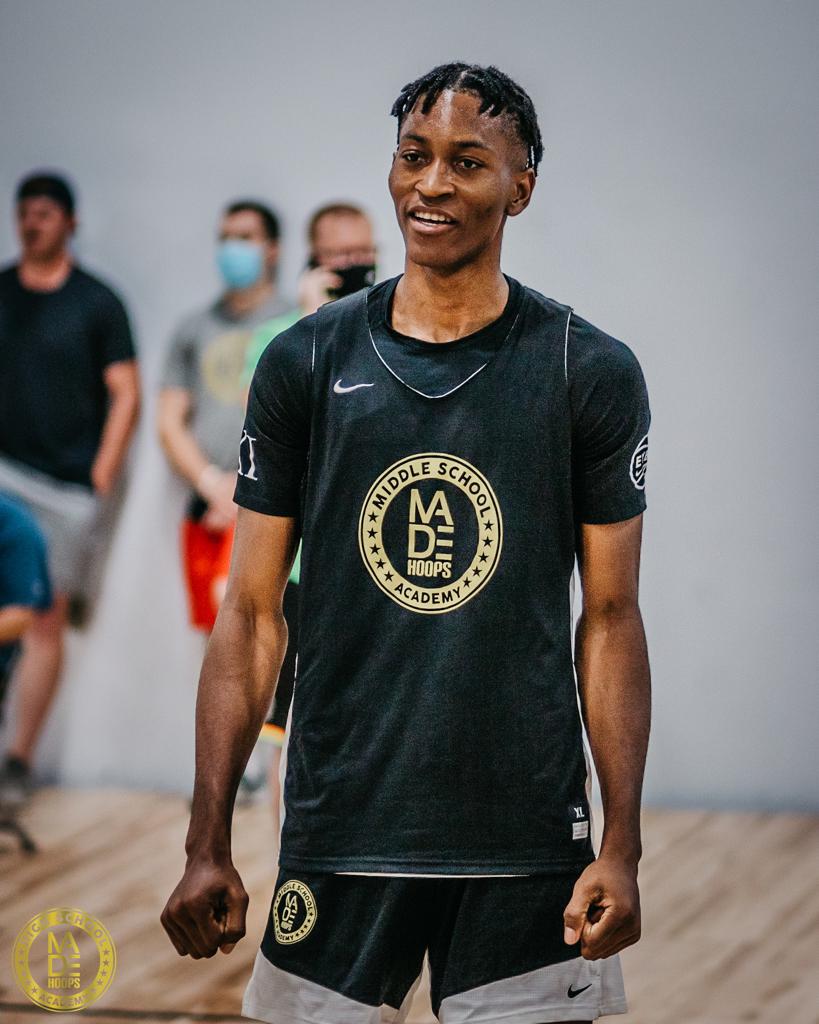 Cyr Malonga, 6’10” Forward: Malonga played some of the most consistent basketball he’s possibly ever played over the weekend. At 6’10”, he’s mobile and runs the court really well. Not only did he do a good job of scoring off of an array of post moves including hooks, drop-steps, and counter-moves, but he also stepped out and hit multiple jumpers from 15-feet and beyond. If he adds a consistent 3-pointer to his game like he showed the potential to do at HSA, look out.

Brandon Gardner, 6’8” Forward: Gardner’s energy and motor was beyond impressive and he was in high gear from the start to end of camp. Gardner plays above the rim, and made highlight play after highlight play over the weekend, whether it be thunderous dunks or annihilating opponents’ shots at the rim. Gardner showcased a developing jump shot and did a good job of handling the ball in the open court. He made a very strong case for MVP of the camp.

George Washington III, 6’2” Guard: Washington can score from all three levels, but what was most impressive was him showing the ability to knockdown outside shots from beyond NBA range with ease. He can play both on or off the ball, but he showcased the ability to be a lead guard, which was one of the biggest question marks surrounding his game. Washington made plays in the open court, off drive and kicks, and also close area dump offs.

Gabe Sisk, 6’5” Guard: Sisk was one of the most consistent players at camp all weekend long, scoring in bunches and showing off secondary facilitator capabilities. He’s a strong guard that excels when getting downhill and finishing at the rim with either hand. His size and strength allow him to get defenders on his hip and get to his spots with relative ease. Sisk goes on runs where he gets absolutely unconscious shooting from the outside and went on a few personal scoring runs that were very impressive to watch.

Macaleab Rich, 6’6” Forward: The first thing that jumps off the page about Rich is his frame. He’s built like a college defensive end as a high school sophomore. The second thing you notice about him is his top of the line athleticism. He tries to rip the rim off on every dunk attempt and attacks on every single play. Rich can also handle the ball and facilitate from the post and on the perimeter. He was one of the better rebounders at the camp, despite being just 6’6”.

Wesley Tubbs III, 6’7” Forward: Tubbs is a very smooth athlete than impacts the game at both ends of the court. His length and athleticism allows him to be a very versatile defender and switch pretty much every position. He’s very confident when getting in position for his mid-range pull-up, and did a lot of his damage from 10 to 15 feet out. Tubbs handles the ball well and showed range out to the NBA 3-point line.

Ja’Vin Jones, 6’2” Guard: Jones went on spurts where he absolutely couldn’t miss from the outside. He had one of the most confident looking jumpers at the event and did a good job of moving without the ball to set himself up for good looks. He scored off of the bounce, but if he had one ounce of space on a catch and shoot look, it seemed to always go in the basket.

Cameron McClain, 6’2” Guard: McClain was one of the breakout performers at the camp. He’s not the flashiest player, but he was one of the most well-rounded and most impactful players on the court at all times. He did a fantastic job of leading his team and was a constant energy source on both ends. McClain can score, but he’s at his best when setting the table for his teammates. Whatever team he was on always seemed to have a well-ran offense and he’s the main reason for that. McClain also showed off his first in-game dunk ever at the camp.

Trenton Hinkle, 5’11” Guard: Hinkle was so much fun to watch this past weekend. He took every single matchup personally and wanted to take it to whoever he was playing. He plays hard at both ends of the court and always wanted to guard the other team’s best perimeter player. Hinkle knocked down many outside jump shots, and was constantly getting paint touches on drives, where he would score or reward a teammate with an easy score off of a dump off or kick out.

John McCrear, 6’8” Forward: McCrear was one of the more high-upside prospects at the camp. He moves really well and is nimble for his size. His jump shot stretches out to the three-point line and his form is very promising for his position. McCrear is a versatile defender that can’t be targeted in pick and roll looks because of his agility. He has soft touch around the basket and knocked down a ton of mid-range jumpers.

Jack Edelen, 5’11” Guard: Edelen really knows who he is as a basketball player and always plays to his strengths. He gets hot quick from the outside and can go on personal scoring runs in the blink of an eye. He’s in range as soon as he crosses the half-court line. Edelen knows how to probe the defense and create looks for himself and for others. He also played very sound perimeter defense all weekend long.

Dallas Roberts, 6’1” Guard: Roberts’ combo guard ability was on full display over the course of the camp. He played the role of lead guard facilitator at times, as well as off guard scorer at others. His ability to wiggle past defenders and get into the lane for a floater or pull-up was very impressive. Roberts has three-level scoring ability and does a great job of letting the game come to him.

Linkin Lockhart, 6’3 Guard: Lockhart was very consistent when shooting from the outside this past weekend. He knocked down many catch and shoot looks, as well as shots he set up off the bounce, including step-backs and side-step threes. Lockhart plays with a ton of confidence and believes every shot that he’s taking will go in.

Zee McCown, 5’10” Guard: McCown is a heady floor general that dictates the pace of play at all times. He’s a pass-first scoring guard that does whatever it takes for his team to win. McCown is an excellent pick and roll facilitator and seemed to almost always make the correct read when accessing what the defense was giving him. He was arguably the best table-setter at the camp.

Folabomi Fayemi, 6’3 Wing: Fayemi’s energy was contagious both in a game setting as well as station work. He went all out on every single play and on every single rep. Fayemi showcased some very solid playmaking ability from the wing, driving and dishing to his teammates when he wasn’t able to get to his spots. He’s a good athlete who made a ton of plays above the rim, and had a knack of finding his way to the basket.

Keith Robinson, 6’4” Forward: Robinson’s hustle and tenacity at both ends was often unmatched. He sprinted the floor on every possession, went 100-percent on defense, and always found someone to box out. He showcased scoring ability near the rim and extended out to the mid-range. Robinson is a very underrated playmaker that made plays for others from the post and from the perimeter.

Sosthene Kamba, 6’6” Forward: Kamba is a very versatile defender that was able to lock up pretty much any opponent despite their position. He’s a good athlete who attacked the rim with aggression. Kamba did a good job of finishing through contact and putting pressure on the defense with his drives. He was one of the best wing rebounders of the weekend.

Kendall Williams, 6’4” Wing: The first thing that jumps off the page to you with Williams is his strong frame. He’s a strong, compact wing that was able to post up smaller, weaker defenders and drive by bigger, slower defenders. Williams scored from multiple levels and did a fantastic job of rebounding his area as well as rebounding outside of it.

Antuan Wordlow Jr., 6’2” Guard: Wordlow was one of the breakout performers of camp, and he caught the eyes on multiple coaches and scouts over the weekend. He scored from all three levels and played with a ton of confidence. Wordlow showcased a confident handle and a confident shot all weekend long.

Casey Steadmon, 6’3” Guard: Steadmon does all of the little things that impact the game in terms of wins and losses. He came up with a ton of 50/50 balls and made a bunch of big steals when his team needed them. He’s a multi-level scorer that often got to the rim, but scored from the mid-range and outside as well. Steadmon showcased secondary ball-handling and facilitator skills as well.

CJ Walls, 6’2” Guard: Walls is a very strong guard that understands angles. He was at his best when getting downhill and putting pressure on the defense. He showcased a quick first step that allowed him to get the defender on his hip and work his way to the rim. Walls’ playmaking ability made life easy on his teammates, and he had numerous assists off of drives and kicks.