The Warmup: 17U Standouts 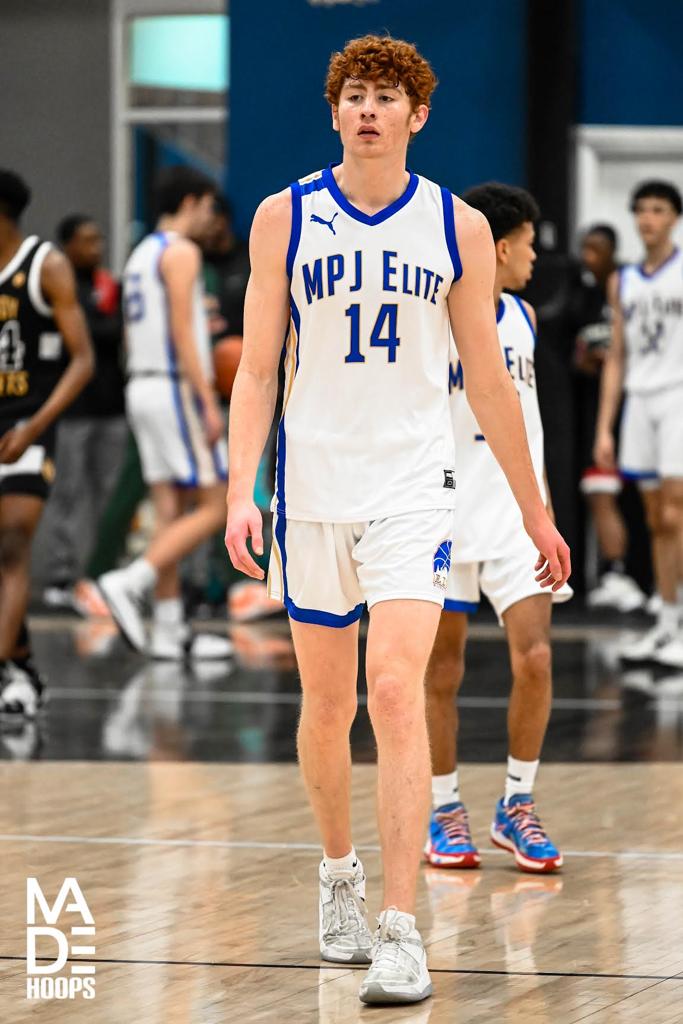 Garrett Scott, Arkansas Mavericks: Scott was at his best with a head of steam heading towards the basket. Good things seemed to happen when he got a foot into the paint, where he would often make the right decision on whether to score or pass the ball. Scott showed off some crafty finishes where he scored over taller defenders.

Mo Sam-Adelusimo, Arkansas Takeover: Sam-Adelusimo showed defensive versatility and an offensive game that translates. He’s a long, lengthy forward that did a little bit of everything at both ends of the floor. He’s most effective when getting the the rim, but showed a nice shooting stroke also.

Kevin Overton, Buddy Buckets: Overton, an unsigned senior, was efficient in getting to his spots and showed multi-level scoring ability. The 2022 prospect also impacted the game at the defensive level, anticipating passes and playing tough interior and perimeter defense. Overton brings versatility to the floor and does a little bit of everything.

Daniel Cummins, CT&B All D.A.W.G.S: Cummins is a strong forward who provided a consistent low post presence for his team. He was very hard to push off of his spot once he got on the block, and was usually much stronger than his matchup. Cummins scored well around the basket and played to his strengths in ever game, finishing off of drop steps and back downs.

Devin Fryar, D5 Global: Fryar was one of the more efficient scorers in the age group this weekend, even eclipsing 30 points in one matchup. Fryar utilized a tight handle and and crafty offensive skill set to get to his spots and score in numerous ways. Fryar was able to do everything from getting to the rim to confidently rising up from NBA range.

JJ Ferrin, ETG: Ferrin has a nice looking jump shot from the mid-range and from the outside. When he’s able to get his feet set and square his body, his mechanics look great. He rises up with confidence and doesn’t let misses affect his confidence level on the next look.

Kohen Rowbatham , FIFA: Rowbatham was fantastic at leading his team at the guard position. He’s a heady guard that plays to his strengths and always seemed to make the right play. Offensively, he scored from all three levels at a high rate and made the right reads in every offensive set.

Jack Medalie, Hawks Elite: Medalie did a lot to raise his stock this weekend, scoring both inside and out and showing off an all-around skill set. Medalie handled the ball well and delivered crisp passes in addition to his scoring numbers. His jumper looked confident and he was able to get to his spots consistently.

Tyler Frederick, Hoops Life: Frederick was one of the more impressive scorers on the weekend, scoring in a variety of ways from all over the court. He showed the ability to play both on or off the ball and thrive in both roles. His best game of the weekend came in a 26 point scoring outburst against FIFA.

Devin Beal, Houston Royals: Beal is a lengthy forward who had a multi-faceted impact in every game that he played. Beal rebounded at a high rate and patrolled the paint on defense, altering a ton of shots. Offensively, he showcased nice touch and showed the ability to step out and hit jumpers.

Corey Chest Jr., LOFDL: Corey is a versatile prospect that made a defensive impact both inside and out. He was able to switch everything on that end of the floor and wasn’t able to be targeting in ball screens at all. His quick hands and feet lead to a ton of opportunities for him to make plays at that end of the court. Offensively, he was effective at working the baseline and finishing in traffic.

Michael Dale II, Magic City Pelicans: Dale did a great job of running the show for his team this weekend, moving the ball around the perimeter and getting teammates where they needed to be. He showed off a confident looking jumper from the mid-range and from the outside. Dale was at his best when getting into the paint and surveying the defense, taking a pull-up jumper or getting to the rim.

Gabe Sisk, Mokan: Sisk showed off knockdown shooting ability from the outside in both games this weekend. Most of his looks were off of the catch, but he showed the ability to shoot off of the dribble as well. Defensively, Sisk was locked in and was disruptive at the point of attack, where he came up with a couple of steals in each game and caused some bad turnovers for the opposing team.

Chris Loofe, MPJ: Loofe is a lengthy forward who was great at both ends of the floor. He altered pretty much every shot in his area and came up with a lot of blocks and deflections for his team. Offensively, he showcased a nice all around skill set, playing both inside and out. Loofe had soft touch around the rim and was able to step out and hit jumpers very comfortably as well.

Christian Moore, Next Page Force: Moore is a heady guard with a very strong IQ that did a little bit of everything on the floor. He played tough perimeter defense and stifled ball handlers at the point of attack. Offensively, he was good in catch and shoot situations and like to get downhill, finishing in the paint or creating for others.

Zee McCown, Quinn Anvils: McCown was a really efficient scorer, showing off range out to the NBA three point line. He did a great job of running the show for Quinn Anvils and was in command of the game every time he was on the floor. He’s a quick guard that isn’t afraid of contact or bigger defenders and scored in a variety of ways.

David Castillo, Team Griffin: Castillo was probably the most electrifying scorer in the building this past weekend. The scariest part? He’s a 2024 playing up with the 17U team. Castillo scored efficiently from every level and lit up the scoreboard in every game he played. Not only did he score the ball well, but he facilitated as well and helped run the show up top for Team Griffin.

Garrett Smith, Team United Texas: Smith had a very consistent activity level at both ends of the floor, showing willingness to attack the glass at all times and playing tough defense. He scored well around the basket and found himself at the free throw line quite a bit. Smith also played very tough defense on the interior.

Arrentin Page, TSF: Page had the ultimate coming out party this weekend, blocking shots, running the floor, and showing off an array of impressive post moves. He was probably the biggest stock riser of the whole event and is now on the radar of some high major programs. Page was physically dominant on both ends of the floor and controlled anything that happened inside the paint. The 6’9” forward also showcased a strong outside shooting game.