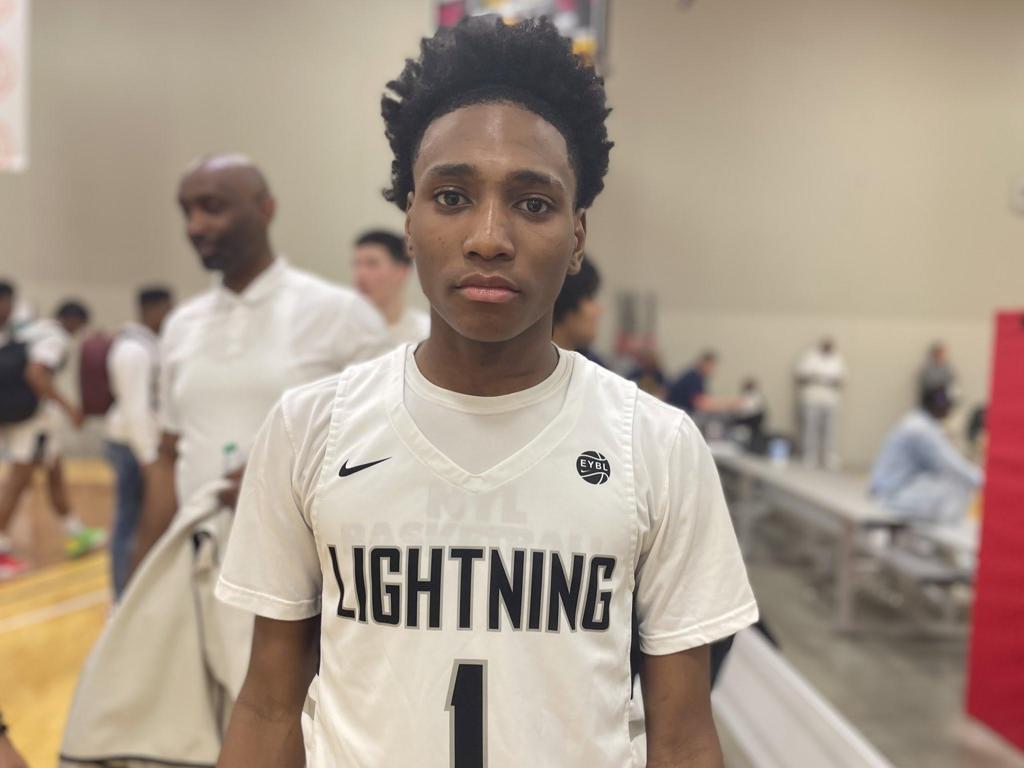 I was fortunate enough to make the trip to Albany, NY and attend Gym Rat LIVE. The tournament features a variety of shoe-sponsored teams from the EYBL, 3SSB, and UAA circuits. Read below for written analysis on some standouts. Make sure to follow @TonyMcNiff2 and @Madehoops on twitter for more content.

Teng proved to be one of the best scorers in a loaded field of competition during Day 1 of Gym Rat LIVE. He has impressive physical intangibles due to his combination of a strong upper body + long arms. He’s a potent space creator with a wide array of shot-creation versatility. Teng knows how to move without the ball and locate open space on the perimeter to spot up in. He converted perimeter shots in spot-up situations or off the bounce creating his own shot. He had a quick enough first step to attack closeouts and get downhill if it was open. Teng holds offers from the likes of Providence, Texas A&M, Auburn, & more, however I expect this list to continue to grow over the summer.

Turkson was a dominant force on the glass during Day 1 of Gym Rat LIVE. He’s a strong, aggressive, and assertive forward that makes a difference on both ends of the floor. He uses his quick verticality + long arms to finish on the interior and in the post. Turkson has the option of scoring by running the floor, posting up, facing up, or finishing lobs. His constant activity on the glass helped him secure numerous offensive rebounds. Defensively was where he was arguably most impressive on Saturday. Turkson’s ability to defend the pick & roll at his size was eye opening. At 6-7 he had the foot speed to stay in front of guards out of switches, although he was a reliable rim protector in the paint. He holds offers from the likes of Providence, Texas A&M, Siena, & more. Turkson could very well see an uptick in his recruitment in the near future.

Simmons provided a late spark for Team Durant on Saturday night to help secure a win over BABC. He’s a multipositional & athletic wing that displayed his ability to play + defend multiple positions on the court. He had the versatility to play on the wing against bigger opponents, although he was comfortable playing in the post. Simmons used his springy vertical & high motor to dominate the glass. He created second chance possessions and finished putback opportunities offensively. Defensively, he was very impressive defending guards out of switches in the pick & roll. Simmons had the lateral quickness to defend in space, yet he already possesses the size + length to contain bigger opponents. He holds offers from the likes of Arizona State, UNLV, & more.

Pettiford is an athletic, quick, & shifty guard that had a strong outing during Day 1 of Gym Rat LIVE. His quick first step + top tier speed in the open floor made it very difficult for opponents to stay in front of him. He was extremely quick with the ball in his hands, possessing the ability to score in the half court or in the open floor. Pettiford’s quick bursts of speed & shifty handle allowed him to get into the lane with ease. He was a crafty finisher that showcased impressive body control when finishing against bigger defenders. He made some impressive reads off a live dribble as well, showcasing that he can play on or off the ball. Pettiford was a scrappy defender that was tough to beat off the bounce. He added offers from UCLA & Maryland in the past few weeks. This list will continue to grow over the course of the summer while standing out playing up an age division.

Oliogu didn’t look one bit of phased playing up two age divisions for Canada Elite. He’s a strong, downhill, & aggressive guard that was an excellent finisher. He could finish with either hand, acrobatically, or through traffic against length. Oliogu showcased impressive body control finishing against bigger defenders. His ability to get into the lane would force the defense to collapse and he made numerous correct reads off a live dribble. He was able to accurately complete drop-downs, kick-outs, and skip passes to the perimeter. Oliogu was able to knock down three-point shots if left open, although that remains a key aspect of his development. Defensively, his athleticism allowed him to defend in space against guards and he proved to be a strong positional rebounder as well.

Power stood out in both of his games during Day 1 of Gym Rat LIVE. He’s a versatile, skilled, and well-rounded forward with a wealth of offensive tools. He thrives as a high-post operator, where he possesses the ability to face up & shoot, to drive to the rim, or to locate an open teammate. Power has an advanced handle, vision, and passing accuracy for his size. He can put the ball on the floor and get by bigger defenders. He’s a constant perimeter threat, especially in spot-up or catch & shoot situations. Power’s noticeably improved his shot-creation versatility in the past year, as he displayed the ability to create & make jumpers from mid-range or three-point range on Saturday. He was very successful being utilized in the pick & pop or when he was isolated against slower forwards. He recently added offers from Stanford & Virginia and it’s no surprise why high major coaches nationwide are competing for his talents.

Ducharme had a solid outing in Game 1 at Gym Rat LIVE, however he was on fire in Game 2 against a talented Team Durant squad. He showcased his full offensive arsenal, whether it was knocking down three-point shots, finishing in transition, or maintaining a primary initiator role. He was able to convert on shots off the bounce or the catch. Ducharme displayed a smooth & fluid release to go along with extended range. He has been playing at a high level this AAU season against top tier competition in the EYBL. His combination of positional size + length to go along with his current skillset makes up for a high major prospect. Ducharme recently added offers from Columbia & Xavier. I expect his stock to continue to rise this summer if he keeps playing at this level.

Brown thrived as a floor general during Day 1’s action at Gym Rat LIVE. He’s a shifty & crafty guard that can facilitate, create for others, and score when needed. He had the handle + quickness to get into the lane routinely. In the lane he could pull-up for a jumper, finish around the rim, or locate an open teammate. Brown was a precise passer whether it was drop-downs, skip passes, or kick-outs to the wing. He had the option of finishing with either hand, through traffic, or with a floater in the lane. He was a fluid shooter from three-point range, especially in spot-up + catch & shoot situations. Brown was a pesky on ball defender that wasn’t afraid to pick up the full 94 feet. He’s certainly a prospect to monitor over the rest of this AAU season.

Ball is a dynamic, well-built, & versatile guard that made an impact on both ends of the floor during Day 1’s action at Gym Rat LIVE. He’s a physical guard that thrived at using his physicality to create angles to the rim. On the interior he could finish above the rim, through contact, or through traffic. Ball did an excellent job using his strong frame to absorb contact & finish through it. He has plenty of burst + explosiveness to get to the rim with ease when the ball is in his hands. Defensively, he uses his long arms + quickness to jump passing lanes and force turnovers. Ball had the versatility to play on or off the ball, however he was just as effective in either role. He’s seen his stock explode this AAU season and it’s easy to see why after getting a live look.

Edwards is a lengthy, fluid, & multipositional wing that always found a way to impact a game during Day 1 at Gym Rat LIVE. He utilized long strides + an advanced handle for his size to create openings to the rim. Around the rim he does a great job using his length to extend the ball away from shot blockers. Edwards combination of a high motor + length allowed him to reel in rebounds on both ends of the floor. He could defend practically any position on the floor, maintaining the foot speed to defend in space. He thrived at using his quick verticality + length to block shots & force turnovers. Edwards can score from the perimeter, however it continues to be a developing part of his game. He’s an assertive driver that is nearly automatic when finishing with his dominant hand. He recently cut his list to seven options: The G-League, Kentucky, Auburn, Tennessee, Villanova, Maryland, and Kansas.

Gertrude is a tough, hard-nosed, & two-way guard that brought a competitive fire each time he stepped on the floor. He was quick with the ball in his hands, which allowed him to blow by opponents in the open floor or the halfcourt. He had broad shoulders that he used to carve up space when driving to the rim against opposing guards. Gertrude knew how to use his body to absorb and finish through contact. His ability to get in the lane allowed open looks to generate from the perimeter. Defensively, he was a scrappy defender that applied constant pressure on the ball. Gertrude could play on or off the ball, however he was effective in either role for City Rocks. He’s a potential stockriser that could see an uptick in his recruitment this summer.

Tyne erupted for a big offensive performance against a talented Team Melo squad. He was a potent-space creator, displaying the ability to create & make contested shots off the bounce. He used a tight handle to get downhill or to create a shot from the perimeter. Tyne handled the ball very well under full court pressure and occasional trap defenses. His quick bursts of speed & swift changes of pace allowed him to create dribble penetration against opposing defenses. Tyne could make reads off a live dribble, whether it was deciding on taking a shot or finding an open teammate. He could finish with floaters, pull-up jumpers, or acrobatic finishes against length in the paint.