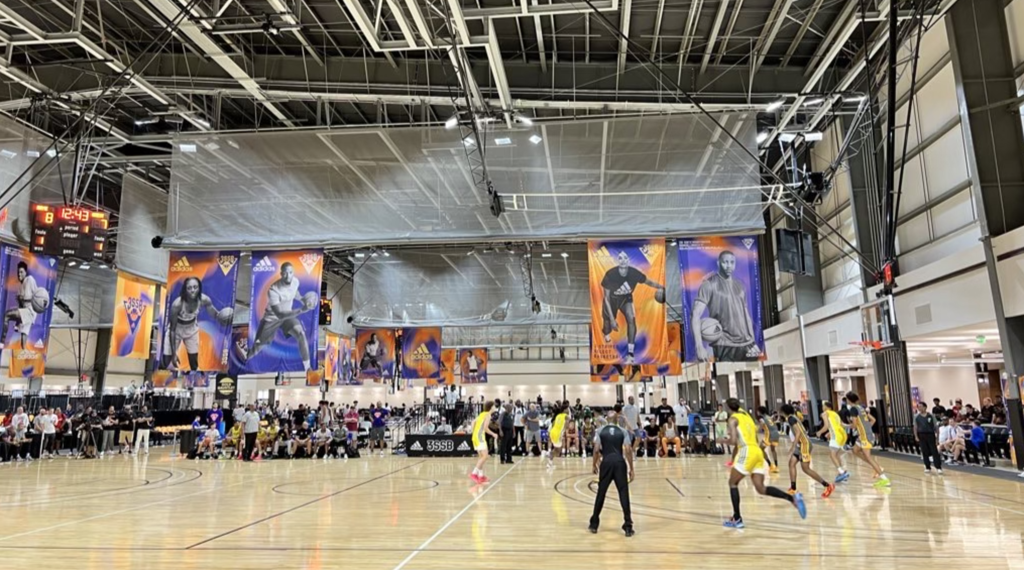 Solid showings from the class of 2023 in Rock Hill, but a few specific within the class raised their stock and opened eyes. I walked through five who impressed throughout the weekend's and an additional three who caught my eye with their development.

The big-bodied guard stole headlines throughout the weekend in Rock Hill.  The Carolina native flourished in a high volume on-ball role, fluidly navigating the pick and roll and consistently making defenses pay for slight lapses in coverage. Strong stride length, touch on his intermediate floaters and runners and an infectious, cool and calm demeanor. It was palpable throughout the gym that Dillione was consistently a step ahead of the opposition, allowing the game to come to him and converting in a myriad of offensive avenues. Offers continue to file in as the Word of God (NC) guard continues his stock-rising summer.

If there was one bankable skill in the gym throughout the weekend, it was that Pryce Sandfort was going to make defenses pay for lackadaisical closeouts. A wiry 6-7 wing with picteresque shooting mechanics as well as fluid footwork and the crafty shot preparation to go with it. The Iowa native continues to add more versatility to his shot profile, but is at the top of the list nationally regardless of class of polished off-ball scorers and pure shooting prowess.

No one saw their stock soar to the degree of Team Loaded VA's Davin Cosby Jr. Hampton and Fordham offered on day one, quickly followd by California, Alabama, Texas A&M, Vanderbilt, Virginia Tech, Wake Forest and Maryland, to just name a few, in the following days. A high energy off-ball scorer and movement shooter with intriguing flashes of on-ball creation. A high feel cutter and crafty downhill playmaker who thrived leveraging hard closeouts to get to his spots. A frenetic perimeter defender with quick feet and strong instincts. Cosby Jr greatly altered his stock and looks like a strong bet to find his name in national rankings in the near future.

Parker brought consistent two-way production throughout the weekend and it wouldn't be a surprise to see a few new programs enter the mix. A physical and hard-nosed 6-6 athlete with a blossoming collection of counters to make his way to the front of the rim. Parker shot it with confidence from beyond the arc, only opening more avenues for rim pressure as the games went on. A cagey, hard-nosed defender who plays bigger than he is but displayed the lateral foot speed to bottle up quicker guards. The pronounced downhill athlete turned previous flashes into winning production in Rock Hill.

It's not all flashy and may not fill up the box score, but Jadyn Toppin's winning impact was palpable throughout the four days in Rock Hill. A long and wiry versatile four-man with a very strong feel for positioning. A consistent two-way presence with strong defensive processing abilities, a crafty finishing package at the cup and physical upside looking ahead. Quick leaper and a high impact two-way forward with an ultra malleable skillset.

Johnson's high skill level and ability to create space and manipulate defenses was evident through each outing. The 6-6 guard's shifty movement skills, inherent flair and creativity attacking set defenses are among the more intriguing calling cards nationally. Crafty float game, flexibility at the rim, foul line production and increased comfort firing from deep all popped. There may not be a more entertaining guard in the class of 2023 given the California native's blend of bend, pace and ball skills.

After popping in session one in Indianapolis, Diop's defensive tools and raw offensive skillset once again caught my eye. An ultra versatile and multi-tooled defender with the pop and length to defend at the rim along with the ground coverage, lateral quickness and instincts to cage up quicker guards. Diop has a real case as the loftiest long-term defensive projection in the class. On the offensive end, Diop was at his best as a high/low playmaker and transition scorer. The 6-10 wing has a fascinating blend of two-way tools and has become one of the most enticing tracks in 2023.

Baker displayed a collection of development strides against top competition in Rock Hill. A mismatch machine offensively with the brute strength and aggressiveness to pave his way to the cup against narrow defenders along with the blossoming quickness and foot speed to draw fouls and finish with versatility against opposing bigs. A strong positional handle, an advantageous approach and a high motor on the glass posed real issues for defenders in transition and in the slow break. Baker fielded a run of new offers in early July and it wouldn't be a surprise to see more file in.