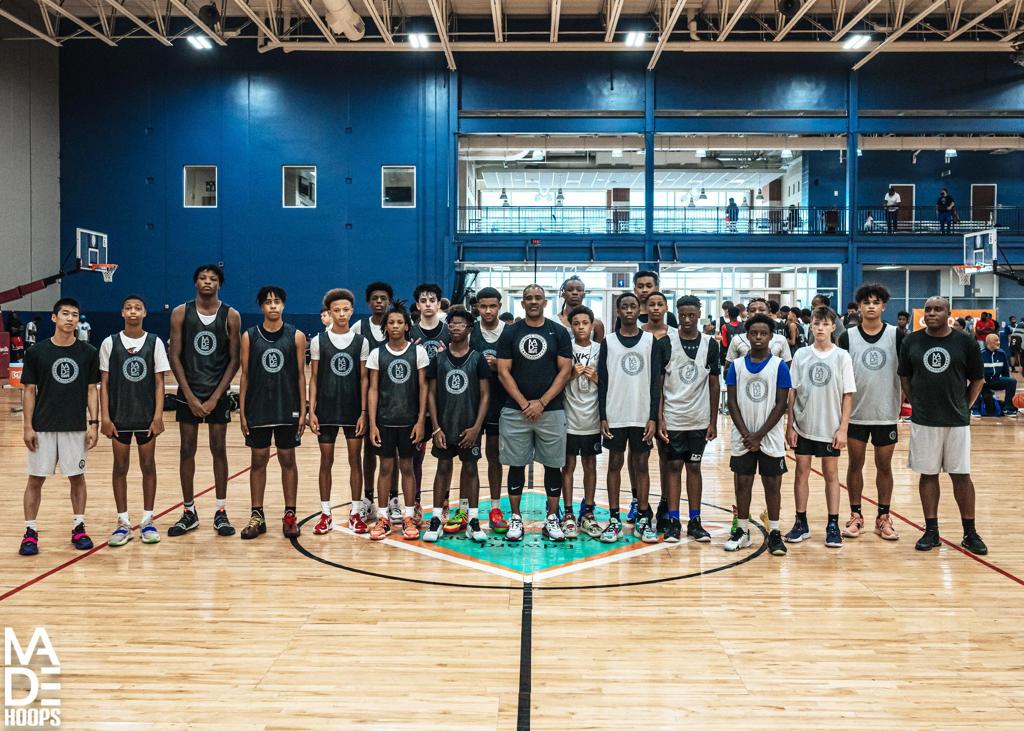 Paul Osaruyi (2027, Forward): Osaruyi is a versatile, fluid, and athletic big that can score in a variety of ways. He has the versatility to be used in the pick and roll, or pop with his ability to score inside-out. He’s a fluid shooter from the perimeter with advanced ball skills for a prospect his size and age. Osaruyi did a good job using his physical tools to protect the rim and rebound the ball. He’s a prospect to keep an eye on out West in the 2027 class.

Antonio McGaughey (2027, Wing): McGaughey is an athletic, versatile, and well-rounded wing that is a strong downhill slasher. He uses an ultra-quick first step and long strides to gain ground when getting downhill off the bounce. He uses his frame + bouncy vertical to finish around or through opponents with his dominant hand. McGauhey put together some impressive flashes of his ability to knock down face-up jumpers in the 12-15 ft area.

Gustavo Roca (2027, Guard): Roca is a crafty and shifty guard that has a natural feel for the game on the floor. He uses a shifty handle and swift changes of pace to get to his spots on the floor to score. He’s a fluid spot-up shooter from three-point range that has the versatility to knock down pull up shots in the mid-range area. Roca is a crafty finisher with a soft float game in the lane. He showed off a strong balance of scoring + playmaking in Chicago.

Caden Crudup (2027, Guard): Crudup is a skilled and versatile guard that showed off his ability to score from multiple levels. He has the handle and speed to create angles downhill, plus he’s comfortable shooting in the mid-range area off the bounce. He was a tough cover in the open floor with his handle, quick speed, and relentless finishing. Crudup proved to be capable of knocking down perimeter shots if opponents gave him enough space.

Dominic Walker (2027, Guard): Walker was another skilled guard that has strong positional size at a young age. His ability to get downhill, create offense, and score when needed was on full display in Chicago. He has the ability to get to the rim or to create space off the bounce for open jumpers. Walker was a valuable playmaker that showed why he is unselfish during his time at camp.

Shawn Foster (2027, Guard): Foster is a smooth and polished shotmaker with a deep offensive arsenal. He had the handle and speed to get downhill frequently, plus he was a consistent threat to score from the perimeter. He was a crafty finisher around the rim, as he possessed the ability to finish through traffic, with floaters, or with either hand. Foster showcased extensive range off the bounce or catch if given enough space to let it fly.

Tiago Lee (2027, Guard): Lee thrived as a primary ball handler and playmaker at camp. His ability to get downhill and create offense allowed open looks for his teammate to generate. He could deliver skip passes, drop downs, or kick outs to find open teammates. Lee did a good job passing through traffic and he was a heady decision maker off a live dribble. He’s a prospect to keep an eye on in the coming years.

Jaylen Newell (2027, Guard): Newell is a crafty lead guard that could score and create for others at a high level. His shifty handle and quick bursts of speed make it tough for opponents to stay in front of him. He has the ability to get to the rim, to pull-up for a mid-range shot, or to find an open teammate. Newell’s vision and precise passing helped him pick apart opposing defenses to get the best look possible for his team.

Steven Jones (2027, Guard): Jones may be a tad undersized, however he didn’t let this stop him from impacting games. His slippery handle and quick bursts of speed allowed him to get into the lane routinely. Around the rim he had a soft touch and impressive body control, possessing the ability to finish through traffic, acrobatically, or with a floater in the lane. Jones was a downhill playmaker that wasn’t afraid to finish against bigger opponents.

Noah Emmanuel (2027, Forward): Emmanuel is a long and two-way big who put a lid on the rim at camp. He does a great job using his positional size, length, and shotblocking instincts to protect the rim. He has the size, length, and touch to finish over + around defenders when operating in the post. Emmanuel is a solid positional rebounder that will continue to get more physical over time. He’s a prospect that could be next up out of Chicago.

Howard Williams (2027, Wing): Williams is a versatile, athletic, and physical wing who consistently beat his man off the dribble. He was a fearless finisher around the rim, especially with his dominant hand through contact or traffic. He uses his upper body strength to bully smaller opponents on his way downhill. Williams has advanced ball skills for a prospect his size, as he can take the ball coast to coast himself after grabbing a rebound.

Scottie Adkinson (2027, Guard): Adkinson is a skilled, polished, and multilevel scoring guard with strong positional size. His polished handle + quick bursts of speed allowed him to beat defenders off the bounce often. In the lane he has the touch + body control to finish through traffic, acrobatically, or with either hand. Adkinson is a capable perimeter shooter that can knock down three-point shots if given enough space. He was one of the best scorers in the 2027 class at camp.

Jimmy McKinney (2027, Guard): McKinney is another skilled guard that had the versatility to score from all three levels. He was a fluid spot-up shooter that could connect on perimeter shots off relocations or kick out passes. His quick first step allowed him to get downhill to the rim where he thrived at finishing with his strong hand. McKinney had a soft floater in the lane and he was a heady cutter when playing off the ball.

Reggie Stevens (2027, Guard): Stevens is a flashy and shifty lead guard that is a high volume scorer on the offensive end. His shifty handle and potent footwork allow him to comfortably get to his spots on the floor to score. He has the handle to comfortably create space for jumpers from the perimeter. Stevens is still working on his consistency shooting off the bounce, however he’s more than capable of knocking down open perimeter shots.

Brandon Wright (2027, Guard): Wright is a skilled guard that was able to score and create for others over the weekend. His shifty handle gave him the option of getting downhill or creating space for jumpers. He had plenty of pull-up touch, as he was able to connect on jumpers if given enough space. Wright was able to effortlessly deliver kick out passes to set up shooters with clean looks on the perimeter.

Andrew Walker (2027, Guard): Walker is a shifty and quick downhill guard that gets into the lane effortlessly. He uses quick bursts of speed and a slippery handle to get downhill, where he can finish at the rim or find open teammates. He had the touch to convert some tough layups through traffic or acrobatically. Defensively, Walker is a scrappy on ball defender that isn’t afraid to apply full court defensive pressure.

William Foulk (2027, Guard): Foulk is a sharpshooting and skilled guard that could light it up from three-point range. His extensive range and off ball movement were on full display during his time in Chicago. He has a quick, fluid, and clean release off the catch or in spot-up situations from three-point range. Foulk had the handle and footwork to beat poor closeouts off the bounce to get in the lane.

Simeon Brill (2027, Guard): Brill was an athletic lead guard that was effective playing on or off the ball. He used an explosive first step and tight handle to beat opponents off the bounce + to get to his spots on the floor. In the lane he could pull-up for a mid-range shot, wiggle his way downhill to the rim, or find an open teammate. Brill was a downhill and straight line slasher that consistently created offense.

Jalen Howard (2027, Guard): Howard may be a tad undersized, however he doesn’t let that stop him from impacting games. He had the speed + handle to consistently penetrate the defense and create better looks for his team. He had the IQ to make reads off a live dribble when weaving in the lane. Howard knocked down some perimeter shots over the weekend when defenders gave him too much space.