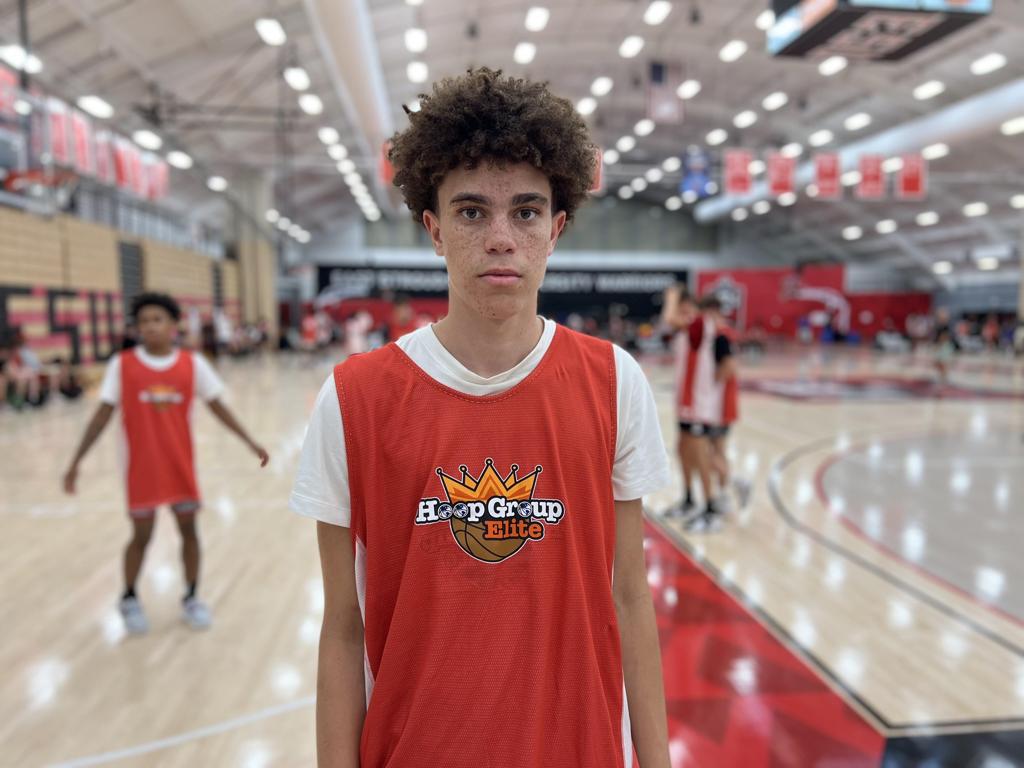 Darius Adams, 2025, Manasquan (NJ) - A high motored guard who can really shoot it from deep. He has a nice handle where he can bring the ball up the court, but he can play off the ball too. He has good length and quickness for a guard so he is capable of guarding smaller guards. He can be a high major player with how skilled he is.

Kiyan Anthony, 2025, Christ the King (NY) - The combo guard was lighting it up during the half court 5v5 session. He was able to take his man off the dribble using his crafty hesitation move and used a plethora of finishes at the rim. He is a capable shooter who looks like he is still growing.

Badara Diakite, 2025, Northwest Catholic High (CT) - One of the most skilled bigs at camp this weekend showed he can be a three level scorer. He took his defender inside and out and knocked down perimeter jump shots. He has a long frame as he blocked and altered his opponents shots.

Stephon Ashley-Wright, 2025, Neumann Goretti (PA) - The Neumann Goretti point guard was one of the craftiest players at camp. He put his vision on display while running the pick and roll game with his bigs. He finished at the rim over bigger defenders and showed off his jumpshot during the afternoon 5v5 games.

Alier Maluk, 2025, Imani Christian Academy (PA) - The 6’10 big is an unstoppable force in the point. He has a long build that he uses to post up his defender. He is a skilled passer out of the post and likes to get to his pull up jump shot. The defensive end of the floor is where he can thrive. He was sending shots all camp and getting easy layups out of it.

Eli Ellis, 2025, Moravian Prep (NC) - His vision when coming off of a ball screen is a very impressive part of his game. He was able to read the defenders during ball screens and often times took the ball to the hole against the big man switching the screen. He has deep range on his jump shot and did a good job of communicating with his teammates.

Nigel James, 2025, Fessenden School (MA) - Nigel James has a quick crossover and likes to get downhill. He finishes at the rim with ease and finds open teammates when getting into the paint. He is a good defender because of his lateral quickness and how often he talks when on the floor.

AJ Dybantsa, 2026, St. Sebastian’s (MA) - He was a do it all player all camp. He found open teammates for baskets, he could take his defender off the dribble for easy layups, and he could shoot perimeter jump shots from anywhere on the court. He has good length on defense and he beat his man to the spot. He was one of the best players at camp.

Nahsirr Hart, 2025, St. Thomas Aquinas (NJ) - Nahsirr Hart can stretch the floor and take his defender inside. He has good moves in the post, but he can knock down open jumpers when given some space. He has a high motor and plays really hard whenever he is on the floor.

Jayden Forsythe, 2026, Westtown (PA) - The Westtown guard has expanded his game very well. He can handle the ball for his team and be a knockdown shooter when called upon. He likes to run the floor and get easy buckets in transition.

Tyler Jackson, 2025, St. Frances Academy (MD) - Tyler Jackson is an explosive player who is good at finishing around the rim. He likes to get to rim and he is capable of finishing over taller defenders. He was guarding some of the others team best players at camp. He showed that he can shoot his pull up jumper too.

Cam Ward, 2025, Largo High School (MD) - Cam Ward has good strength when he gets in the paint. He got into the post and finished at the rim against defenders who were bigger than him. He is a really good rebounder and sets hard screens for his point guard.

Danny Carbuccia, 2025, Archbishop Stepniac (NY) - The small guard is a high IQ player who can do it all on the court. He is a good shooter who can defend a big or quick guard. He can handle the ball and be the leader for his team. He was very impressive when playing 5v5 at camp.

Erhunmwunse Oswin, 2026, Busche Academy (NH) - He was one of the biggest kids at camp who can be a force in the paint. He had very good length where he altered opponents shots all camp. He plays hard on the offensive and defensive side of the floor. He can finish around the rim and pass out of the post.

Chidi Nwigwe, 2026, Bergen Catholic (NJ) - Chidi Nwigwe is a smooth big who can take his defender inside and out. He knocked down three point shots all camp and took smaller defenders inside with his size. He can guard all positions on defense with his size and because of how quick he is.

Danny Murray, 2025, Roselle Catholic (NJ) - A knockdown shooter who is willing to play defense. He has a smooth stroke from the outside. He is capable of pulling from deep where a defender always needs to be on him. He is a taller guard who can guard bigger defenders with his size.

Dylan Mingo, 2026, Long Island Lutheran (NY) - Dylan Mingo is a quick guard with a good handle. He has a fun game to watch because of his willingness to get his teammates involved. He is a good scorer, but can pass the ball just as well too.

Aiden Argabright, 2025, Saint Stephens (VA) - A smaller guard who gets to the rim easily with his quick handle. He has a smooth crossover he uses to get into the paint where he can score or kick out to an open shooter. He can shoot the ball when given space, but he is a very good facilitator.

Drew Corrao, 2026, Archbishop Carroll (PA) - The long big man is good at running the floor and defending the paint. He guarded some of the best bigs at camp who were older than him too. He uses his long arms to alter shots and had the athleticism to run the floor.

Elijah Moore, 2026, Xavier High School (CT) - Elijah Moore is a smaller point guard who is good at running the team. He gets his gets into position to score with his passing. He comes off of the pick and roll well and makes good passes. He is capable at getting to the rim and is a crafty finisher.