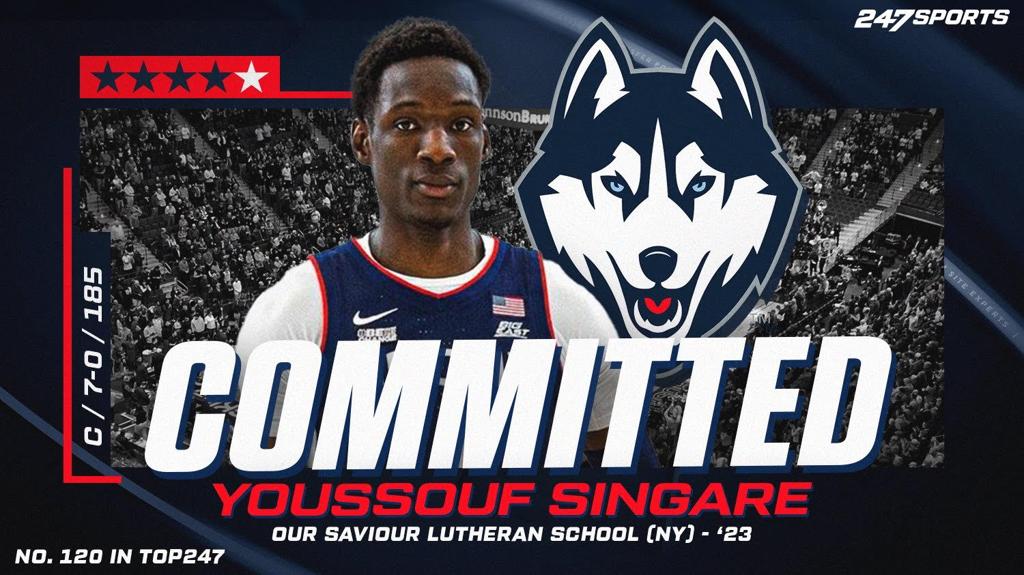 Singare has committed to UConn over Providence and Seton Hall. He also held offers from the likes of BYU, St. John’s, Saint Louis, and more. He joins the Huskies loaded 2023 class, joining Stephon Castle, Solomon Ball, Jaylin Stewart, and Jayden Ross. Coach Hurley has put together the #3 ranked 2023 recruiting class nationally (Per 247Sports). UConn fans have a ton to be excited about for the future core headed to Storrs. Singare gives the class a high-upside big man alongside two guards and two wings. He’s a prospect to keep an eye on in the coming years as he continues to develop and get accustomed to playing in the Big East.

Analysis: Singare is a long, mobile, and athletic big that has tons of long term upside to tap into at the next level. He’s known for his presence on the interior, however he put together some impressive flashes on the EYBL Circuit. He plays with a high motor on both ends of the floor, whether it’s grabbing rebounds or running rim to rim. Singare uses his long strides to run the floor where he is able to earn clean looks at the rim when beating opposing bigs down the floor. He can be used as a vertical floor spacer with his positional size, quick verticality, and solid hands at the rim. He’s developed his shooting touch in the past few years, however it is still not the strength of his game. Singare’s offensive game should continue to progress when he partakes in a college weight training program. He’s an elite rim protector with natural shot blocking instincts, long arms, and plenty of lateral mobility. His ground coverage and mobility allows him to rotate quickly to contest opponents' shots. Singare will need to polish his offensive game, although there’s a lot of tools for the UConn coaching staff to work with. The Huskies have a loaded 2023 class headed to Storrs and Singare could be the final piece to the puzzle within their 2023 class.