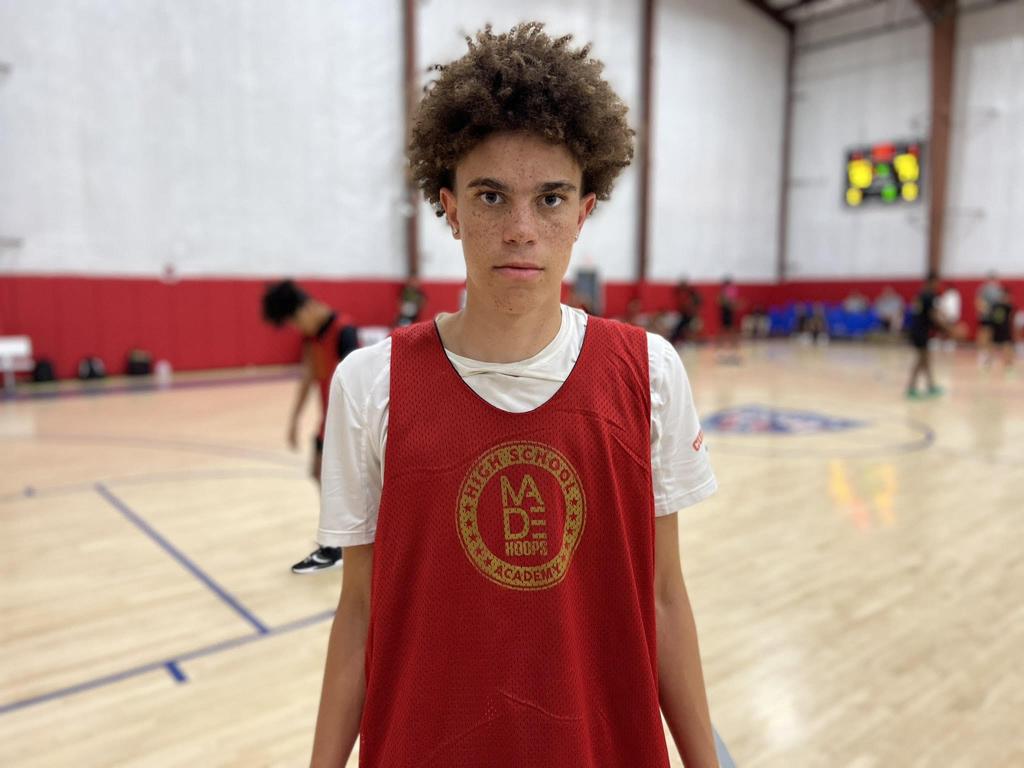 Darius Adams (2025, Guard): Adams is a long and smooth guard who showcased his full offensive arsenal in Saturday’s game sets. He uses a crafty handle to get to his spots on the floor to score, whether it’s from the perimeter or around the rim. He has extensive pull-up touch and a fluid shooting release off the bounce or catch. Adams was able to connect on jumpers when spotting up, plus he showed off his ability to create off the bounce for himself and others. Defensively, he does a great job using his length to force turnovers and jump passing lanes.

Will Riley (2025, Guard): Riley is a highly skilled guard with a lot to like long-term given his physical tools. He possesses disruptive length, strong positional size, and plenty of athleticism. He was able to score from multiple levels in Saturday’s game set, whether it was off the bounce or catch. Riley is a smooth shooter with a fluid release, plus he has the wiggle in his handle to get downhill frequently. His ability to score from multiple levels made him a tough cover for opponents for various reasons. He’s a prospect to keep an eye on as he’ll be playing with the Phelps School (PA) this upcoming season.

Badara Diakite (2025, Big): Diakite is a versatile big that oozes with upside given his shooting ability at 6-10. He possesses functional positional size, disruptive length, and plenty of mobility on both ends. He can be used as a vertical floor spacer or as a lob threat with his ability to finish above the rim. Diakite is a reliable face-up scorer that uses a high release to shoot over opposing defenders. He’s a lethal threat in the pick and pop given his shooting range + consistency. He uses ample ground coverage to complete rotations and to switch onto opponents on the perimeter. Diakite showed a solid feel for a prospect his size and position, as he was able to deliver some timely passes out of the post when a double team was sent.

Deuce Jones (2024, Guard): Jones is a shifty and athletic lead guard that put constant pressure on the rim during Saturday’s action. He used a slippery handle and quick bursts of speed to beat defenders off the bounce routinely. He’s a crafty finisher in the lane that has the option of finishing acrobatically, through traffic, or with a floater in the lane. Jones made some impressive reads off a live dribble when operating the pick and roll as a primary ball handler. He scored around the rim, knocked down some mid-range shots, and got his teammates involved at a high level. Defensively, he is a scrappy on-ball defender that uses his lateral mobility + quick feet to stay in front of opposing ball handlers.

Adam Oumiddoch (2026, Guard): Oumiddoch continues to track as one of the best nationally in the 2026 class. The skilled and multilevel scoring guard put together some impressive spans of play. He’s a consistent spot-up shooter that uses a smooth and fluid release to connect on perimeter jumpers. He’s an excellent creator off the bounce, as he’s a proficient shooter from multiple levels on the floor. Oumiddoch did a great job recognizing isolation situations and taking advantage of them. He has the ball skills to blow by bigger defenders, plus he has the ability to shoot over smaller ones. He’s a prospect to keep tabs on in the coming years as he continues to develop his game.

Tahaad Pettiford (2024, Guard): Pettiford is coming off a big AAU season while playing up an age division with New Heights Lightning in the EYBL Circuit. He’s an athletic and two-way guard with a valuable impact on both ends of the floor. He uses an explosive first step to beat defenders off the bounce and put pressure on the rim. Around the rim Pettiford can finish through traffic, acrobatically, or above the rim if given a runway. He’s a bouncy finisher that has a knack for converting tough finishes with his dominant hand in the lane. He’s taken noticeable strides shooting the ball, as he’s solidified himself as a legitimate spot-up threat from behind the arc. Defensively, Pettiford is a tough on-ball defender that isn’t afraid to apply full court pressure. The New Jersey native also recently completed an official visit to Auburn.

Preston Fowler (2025, Forward): Fowler is an athletic wing forward who put together some impressive spans of play during Saturday’s game sets. He’s a mobile rim runner that has the foot speed to beat opposing bigs down the floor. He does a great job using his positional size and physicality to finish around the rim. Fowler is extremely versatile on the defensive end of the floor due to his positional size and lateral mobility which allows him to defend multiple positions. He has the athleticism and handle to beat slower bigs off the bounce to get to the rim. He’s still developing his offensive game, however he showed some glimpses of his floorspacing ability.

Jakeel Registe (2024, Wing): Registe is an athletic and explosive wing with a malleable two-way presence on the court. He stood out on the defensive end with his switchability, toughness, and versatility. His combination of positional size, advanced athleticism, and lateral quickness give him the option of defending some guards, wings, or smaller forwards. Registe is a downhill and straight-line slasher that uses his speed to put pressure on the rim. He’s a bouncy finisher that is a threat to put defenders on a poster with his explosive vertical. He recently announced he’ll be playing for Our Saviour Lutheran (NY) next season.