Day One of Lawson & Oladipo Camp was a Success 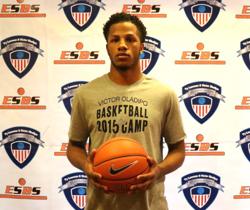 Stevens has an impressive first day.

The Ty Lawson & Victor Oladipo All American Camp kicked off with yesterday afternoon with a skills workout.

Stevens’ Recruitment is Winding Down

There is plenty of high major talent on hand and one of the premier prospects on hand was Lamar Stevens. He looks to get a lot out of this camp.

“I’m just trying to learn as much as I can from these guys to help my game,” said Stevens. “I’m planning on going out there and having fun while working on as much as I can. There are some very good players here, so I like how it’s gone so far.”

The recruitment process is starting to wind down for Stevens.

“I’m just trying to get all my visits set up to see some schools because I haven’t seen many thus far,” he said. “Other than the local schools I haven’t visited many. I want to go out and see what they have to offer elsewhere. I’m looking forward to narrowing my list down to six to ten in the next month.”

Pittsburgh, Marquette, Indiana, Villanova, Temple, Florida State, Penn State and more have offered the Philly native. He says that Ohio State has expressed interest in him. He has set a couple visits for the future.

He thinks seven schools are after him the hardest right now.

“I would say Penn State, Marquette, Indiana, Villanova, Temple, Xavier and Pittsburgh are after me the hardest right now,” he said.

Plenty of schools are waiting what Lamar will do in the next month or so as he makes some big decisions.

Straight from the Peach Jam Championship for Sneed

Class of 2016 St. Louis Eagles wing Xavier Sneed just finished up a solid Nike EYBL season and rose his stock quite a bit. He enjoyed the experience of making it to the Peach Jam Championship.

“It was a great experience for us especially since we were looked at as the underdogs of the whole tournament,” he said. “People never thought we would go anywhere in the tournament, but we proved them all wrong by making it to the Finals.”

Sneed is looking to wrap up his recruitment shortly.

“I like how the whole process is going right now, I think I’m about ready to start wrapping things up,” said Sneed. “I’ll probably be making my top five soon.”

He will use three main factors to make his decision in the future.

“The academics at each school, the relationships between the coaches and the players and if the school has the ability to produce players to make it to the NBA,” he said.

Class of 2018 center Connor Vanover came into this year’s AAU season with a lot of buzz. He has lived up to all of it and is starting to gain some offers.

Vanover is also excited about taking part in camp this week.

“I’m looking to hone my skills, hopefully get better at some new things from these coaches and do a good job working together with these players at camp,” said Vanover. “Some college coaches will be here so it will be a good camp to get exposure in that respect.”

He recently took part in the 2015 FIBA Americas U16 Championship for Team USA where they came in first place. The overall experience was incredible for him.

“It was kind of crazy, it was surreal because it was a completely different place than what I was used to,” he told MADE Hoops. “It was a Third World country in a small little town and I was familiar with really anything there. It really helped us bond together as a team and it was just a great overall experience.”

Looking forward Vanover wants to accomplish some goals heading into the rest of this summer.

“I’m just trying to get stronger and fast as well as being more of a threat inside and out on the perimeter,” he said.