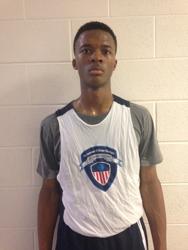 Elijah Pemberton Shines on Day One.

Day Two of the Ty Lawson & Victor Oladipo All American Camp lived up to all expectations and it was a great way to start off the second live session in July. Plenty of players in the event made a big impression on over seventy-five college coaches in attendance.

Class of 2016 guard Elijah Pemberton started off camp with a solid performance. He scored 16 points and added on 4 assists. He was happy to get the first game under his belt and has gotten a lot of the camp.

“It’s been great thus far especially with all the yoga and the extra aspects of the camp that are provided to us,” he said. “I’m learning new things about my body and skillset. I’m also learning a lot for Vic and this camp has been just an incredible experience.”

College coaches have explained to him how his game will translate on to the next level.

“Coaches think that I am athletic and can play the one, two or an undersized three,” he told MADE Hoops. “I try and drive the lane and make shots as much as possible. Coaches tell me to continue to do the same on the next level.”

Pemberton was offered by Kansas State in early May as a member of 2015 class, but decided to remain apart of the 2016 class. His recruitment is beginning to pick up after solid performances at Peach Jam.

“My recruitment is starting to pick up after Peach Jam with schools like Butler, Indiana and St. Bonaventure expressing interest in me,” said Pemberton.

Duquesne, Hofstra, George Mason, Monmouth, Fairfield, Southern Illinois and more have offered him. As his recruitment progresses he is starting to get a better idea of what he is looking for in a school.

“I’m just looking for somewhere to grow as a player,” he said. “I’m athletic, but I feel I still need to work on my skillset to be successful on the next level. I just want a school that will push me to be the best I can.”

Class of 2016 forward Mubarak “Mo” Muhammed came into camp without notoriety, but definitely didn’t leave Day one that way. He scored 17 points and grabbed 14 rebounds in his first game of the week. Muhammed has a very interesting story with him only being in the United States for three years.

“I came over here from Nigeria when I was fifteen because I started to play basketball,” he said. “I love the game the game and do as much as I can to help my team. I’m not a scorer, but I do a good job at grabbing rebounds and playing with a high motor.”

He has enjoyed his first couple of days at camp.

“It’s fun here and there is a lot of talent,” said Muhammed. “Everything about this camp is very motivating and I love it. I’m making friends and playing the game I love.”

He doesn’t hold one offer yet, which has been surprising to many. Muhammed does hold interest from Arkansas, Alabama, Auburn, Troy and Sam Houston State. He is taking what he has learned here at camp and using it to how he can help his game in the future.

“I don’t usually watch a lot of game tape, but now that I saw how useful it can be here at camp I am going to start watching film,” he told MADE Hoops. “I have a lot of athletic ability, but I just want to improve my basketball I.Q. and game tape will help me with that.”

Class of 2016 wing Zach Norvell has a lot of schools that are actively recruiting him so he is taking it all in slowly.

“I’m just taking it all in right now and my family and I are going to sit down once July ends to talk about everything thing that is on the table for me,” he said. “I want to see what schools have to offer by taking my time with it all.”

Illinois, Bradley, Loyola, Memphis, Oklahoma, DePaul, Florida State, Wake Forest, Purdue and more have offered him. He has received interest from Georgetown, Kansas, Oregon, Gonzaga, Arkansas and Colorado. He has an official planned to Illinois, but isn’t sure when he will visit.

Norvell got back from Peach Jam recently and enjoyed the whole experience.

“I went last year with my 16U team so it was great getting back to Peach Jam,” he told MADE Hoops. “We went out and competed and that is important. We didn’t come out on top, but we still had a great run at it. It was a fun season and it was great playing in a competitive league like the EYBL.”

He has taken a lot away from the first couple of days at camp.

“This is one of the few camps where the NBA player in attendance is very hands on,” said Norvell. “Victor is very active with us and he is just a very good guy. The talent overall has been great here.”

Premier Matchup Between Rodgers and Lykes

Everyone in attendance was looking forward to the last game of the night where 5’2” Darnell Rogers and 5’6” Chris Lykes matched up against each other. They both definitely didn’t disappoint as Rogers scored 21 points and Lykes had 23. Rogers enjoyed going against Lykes last night.

“He’s like my brother, it is always great going up against Chris,” he said. “I know he’s always going to compete and play hard defense. That’s what I’m looking for as I get ready for college.”

Lykes liked the challenge of going up against Rogers and was happy with how his first game went.

“Since it was my first game I was still getting used to it all,” said Lykes. “I’m getting adjusted to my team and how they like to play. In terms of the game it was basically based off of Darnell and I. He came out to play and so did I. We had the win at first, but Darnell made some plays and came away with a win.”

Class of 2016 small forward Brachen Hazen left the camp early due to an injury. Valparaiso, Ball State, Creighton, UCF and more have offered him. A couple of schools have expressed serious interest in him.

“Maryland has come into the picture and has expressed serious interest in me,” he said. “Butler is another school that is showing interest in me.”

He doesn’t have any visits planned yet, but does know that he is looking to narrow his list soon.

“I’m most likely going to be cutting down my list in the next couple of weeks,” said Hazen. “In terms of a decision I will probably decide before my high school season starts.”

“Recruiting isn’t that big of a deal for me right now,” he said. “I’m enjoying the process right now, but I’m just focused on basketball and being a normal teenager.”

Temple, Penn State, VCU, George Mason, Miami, SMU, Holy Cross and Rice have offered him. Virginia and Maryland are expressing interest in him. He will continue to gain multiple offers as the live period continues.