Players Shine on Day One of Hoop Group FAA Camp 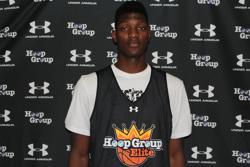 '18 Big Man Silvio De Sousa lives up to all expectations on Day One.

Hoop Group Future All-American Camp Day One came to a close and it lived up to all expectations heading into the event. A couple stood out and made a big impression on everyone in attendance.

De Sousa Shines on Day One

Class of 2018 power forward Silvio De Sousa stole the show with some incredible performances to kick off FAA. He moved to the United States from the African Country of Angola six months ago. In a short period of time he has already made a big impact in the U.S. and is isn’t looking back as he is headed to national powerhouse Montverde Academy (FL).

“It’s going to be good for me and fun next year with them,” said De Sousa. “I am just very ready and excited to play next season for them. I just need to work hard and follow in the footsteps of Ben Simmons to be one of the best in the country.”

He says he looks up two players that have both made a huge impact in the NBA.

“The two players I look at for my game are LeBron James and Shawn Kemp,” he told MADE Hoops.

The class of 2018 standout is looking to get a lot out of the rest of camp.

“I just want to do everything I can here and show my work ethic,” he said. “I want to really work here with my teammates. There are really good players here so I really want to play well. I want to learn to be disciplined, humble and be ready to do whatever my coaches say I should do.”

De Sousa is quite the talent and really heightened the intensity early at FAA. Expect to hear a lot more about him the following days.

Jahvon Quinerly just finished up a very successful AAU season for Sports U (NJ). The class of 2018 point guard has looked great at camp thus far and is happy to be experiencing it all.

“It’s a good experience being here after having a long summer and I’m just trying to finish it up strong here at camp,” said Quinerly. “I’m looking forward to some good competition and work on a few things with my game.”

He holds offers from Tennessee, Penn State, Cincinnati, Seton Hall, St. John’s, Villanova and Rider. Iowa State, Florida, Notre Dame, Stanford, Syracuse and Virginia have expressed interest in him. He is taking a humble approach to the recruitment process.

“It’s good and kind of crazy at the same time for me,” he said. “I know it’s only going to get better, but I just have to keep humble through it all.”

A decision is still far away for him, but knows what he wants in a school on the next level.

Muhammad Showcases his Talent on a Big Stage

Luther Muhammad showed why he is regarded as one of the best guards in the class of 2018 yesterday at FAA. He believes he has a lot to look forward to with this camp

“I’m looking forward to getting better from this camp by improving my overall game,” he said. “I look to work on things like my off hand, shooting and get better all around.”

He is a versatile guard and can help whatever team he suits up for in various ways. His AAU coach has helped him with what positions he can play on the floor.

“My AAU coach tells me that I am a combo guard so he wants to see me playing the one, the two and sometimes even the three.” said Muhammad. “I just have been working on whatever I can do to get the most out of my game.”

A lot has happened for him in terms of recruitment early in his high school career. He looks at it all as a result to the work he has put in.

“I just take it in as my hard work is paying off and as long as I keep working hard more schools will come,” said the rising 2018 guard. “I have to keep working and I’ll get as much out of it as I can.”

Pittsburgh and Rider have offered him and Virginia, Notre Dame, Boston U, St. John’s, Villanova and more are expressing interest in him. He has greatly improved in the past year and will most likely continue to rise as his game is still developing.