Seventh Woods is down to four schools

Elite class of 2016 prospect is now looking at four schools 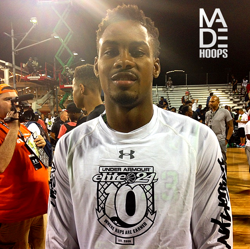 South Carolina, North Carolina, Florida and Georgetown have made the cut for Seventh Woods.

One of the best guards in the country has cut his list to four schools. Class of 2016 shooting guard Seventh Woods has narrowed it down to South Carolina, North Carolina, Florida and Georgetown have made the cut. There are a couple of main reasons why these four remain for him.

“I know that I will play right off the bat at all four of those schools,” said Woods. “I know they will get me better and they’ve done a great job recruiting me.”

Woods spoke specifically on why he likes each school on his list.

South Carolina: “South Carolina is my hometown school, they have been involved in my recruitment for a while and I know that I will get better there,” he said.

North Carolina: “North Carolina really hasn’t been getting recruits lately, but I now have an opportunity to come in and set a path of my own,” he said.

Florida: “I like Florida because of their fast paced offense,” he said. “They’ve told me I can play into that style of play.”

Georgetown: “Georgetown is another school that plays at a fast pace,” he said. “They and Florida have both done a great job showing me that.”

He doesn’t have an exact plan to go by with his recruitment going forward, but has an idea with certain parts of it.

“I plan on taking all of my visits in September and October,” he told MADE Hoops. “This way I get some time after to make a decision. I’m not sure exactly when I’ll make a decision though. That all depends with when I feel comfortable enough with a school.”

Two factors mean the most to him with his future decision.

“I’m going to base it off of course the campus and just meeting with the coaching staff,” Woods said. “I just want the opportunity to talk with them and see what their plan is for me.”

Looking back Woods is happy to be in the position he is in now as a player.

“I’ve seen myself become a way better player through high school,” he said. “I started playing varsity in eighth grade and I feel that I have continued to improve every year and that’s all I can ask for.”