Wenyen Gabriel talks the latest with his recruitment. 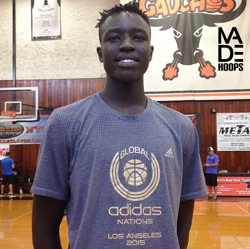 Wenyen Gabriel has progressed with the recruitment process.

Class of 2016 Wilbraham & Monson (MA) power forward Wenyen Gabriel has been very busy lately with his recruitment. He has had multiple in-home visits and is starting to get a much better feel for the overall process. He is looking at five schools in UConn, Providence, Kentucky, Maryland and Duke. Gabriel likes a lot about each school that remains on his list.

UConn: “I like UConn firstly because of Coach Ollie and my relationship with him,” he said. “I feel that he is very trustworthy and I really like their style of play. I can improve and get to be the player I want to be there. Playing with another Mass Rivals guy in Jalen Adams would be a good experience as well. UConn would be a good position for me and they’ve continued to recruit me very hard so I like that about them.”

Providence: “I like the relationship I have with Coach Cooley,” he said. “I probably have the closest relationship with him out of all the different coaches. I can really relate with him and they’ve done a great job explaining to me who they will use me on the court, which reassures me that I can make it where I want with their team.”

Kentucky: “I like how Coach Calipari is pursuing me and coming at me really hard,” he said. “His goal is the same as mine and that is to help me reach the NBA. They have an historic program and I think it would be a really good fit for me. They’ve done a great job recruiting me along with the other four schools on the list.”

Maryland: “I like Maryland and they’ve done a great job recruiting me,” he said. “They’ve been recruiting me for a while and they are now ranked the preseason number one team in the country. They are doing great things and they are really an up and coming program. College Park is great and the atmosphere is great as well. They were my first visit and I really liked how it went.”

Duke: “I like Duke and as some know I liked them growing up as a kid,” he said. “It doesn’t matter who else they are recruiting now because it simply doesn’t bother me and change my opinion about them. They are visiting me today. Duke is definitely still there for me and they haven’t backed out at all. They are on my final list of five for a reason.”

The class of 2016 standout has some more visits from coaches to come going forward.

“Maryland visited me yesterday, Coach Calipari should be coming in next week and I spoke to Coach Cooley from Providence and Coach Ollie personally the other day,” he told MADE Hoops.

He went into in-home visits with a certain approach and mindset.

“Going into the in-home visits I went in with an open mind just so I could see what schools had to say,” said Gabriel. “I just wanted to hear them out and understand what their plans were. I took away a lot from those visits and I got a much better feel for what those schools had in store for me. Each school did a really good job and it was great to get a chance to hear them out.”

Gabriel has all of his official visit plans set for the next coming weeks.

He is still taking his time and isn’t sure exactly when he will make his decision on a school.

“I’m just really thinking about when would be best for me right now and as I am going on these visits I keep in contact with all the schools still involved,” said the class of 2016 forward. “I’ll have a good idea of where I want to go after all these visits so I might be deciding in November, but nothing is official and I am taking my time. I’m going to take all of my visits and let it sink in.”

The five schools recruiting him have all set good plans for how they will utilize his perimeter skills and more.

“I’ve already made it known that I would like a place that will develop my perimeter skills and each school has offered a good plan for how I can do that,” he said. “I’m huge on developing my game and getting to the next level. That is a common theme about what I like in each school. I just really like the idea of how I can get better because I’m always looking to learn and expand my game.”

His final high school season is right around the corner and this year for Wilbraham & Monson Academy he will be taking on a much bigger role.

“It’s really exciting for me as I get to play a bigger role this year,” said Gabriel. “I feel that I played well last year, but this year I have the ability to be a much better leader. It’s a new challenge for me and we are going to go through some tough times like any season, but it’s definitely something I’m really looking forward to, I can’t wait to battle out there with my teammates.”