Chris Lykes is looking to visit schools in the next couple of weeks. 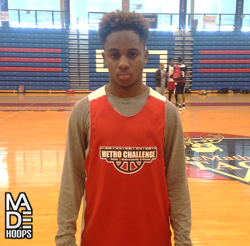 Chris Lykes will cut down his list during the summertime.

Chris Lykes had one of the best seasons in throughout the country in high school basketball. Lykes is a junior at Gonzaga College High School (DC) and plays in the prestigious WCAC where the likes of DeMatha Catholic, Paul VI, Bishop O’Connell and more play in. When the season was all said and done Lykes won WCAC Player of the Year. This accomplishment was rewarding especially with the amount of work he put in during the off season.

“It was a big individual award for me especially with how prestigious a league like the WCAC is,” he said. “It wasn’t necessarily my main goal for the season, but winning it with guys like Markelle Fultz, V.J. King and more in the league as well means a lot. I put a lot of work in before this season and coming away player of the year shows it paid off.”

He focused on two main components of his game before his junior season took off.

“This year I worked on my stamina and extending my range,” said the junior point guard. “I wanted to be able to shoot farther especially with the zone being used so often. I just wanted to make sure I worked on certain in game situations so when the time arrives I would be ready.”

Lykes is suiting up with Team Takeover (DC) this AAU season, but before he played in any games for them Lykes played in the Metro Challenge. This event took place this past weekend and included some of the best talent in the D.M.V.

“This is a setting for the best of the best in the D.M.V. so you want to just come out here and prove all the things that you did well during the high school season,” said Lykes. “It’s been a good experience and it has me really looking forward to AAU season.”

After an impressive high school season, his recruitment has dialed up a notch. He and his family are doing everything they can to be prepared for the rest of the process.

“My recruitment is doing well right now after my high school season,” Lykes said. “I’ve talked a lot with my family and have been closely examining every school and seeing which one would be the best place for myself. We are also watching game film to see how the coach does with his players.”

He named five programs that have been persistent with his recruitment.

“Notre Dame, Miami, Villanova, Georgetown and VCU are the schools that are recruiting me hard,” he told MADEHoops.

Georgetown offered Lykes in early January and ever since then Coach John Thompson III and his staff have been very clear on how much of an impact he will make on their program.

“They have told me that I can be a game changer for them because they are looking to change their style of play,” he said. “Coach Thompson and his staff want to match the intensity of all the other big east teams in the conference. They want me to come in and be that factor that will change things for them.”

Villanova is the second most recent school to offer Lykes, but even with that being the case Lykes has a great idea of what he likes about the Wildcats.

“Villanova is a guard school and they like to spread the floor,” Lykes said. “Ryan Arcidiacono has done a tremendous job leading that team and does a lot of little things for them. Offensively they are great, but I believe that their defense is what’s getting them past a lot of teams. They are definitely a fun team to follow.”

The Miami Hurricanes have been actively recruiting Lykes for over a year. They are another program that he is very familiar with.

“Miami runs a lot of ball screens and that is something that I really like,” he said. “They have had tremendous point guards in the past and Angel is doing a great job there now. Coach Jim Larrañaga is a great coach so there is a lot to like about Miami.”

Notre Dame made an incredible run to the elite eight in the NCAA Tournament. Before this took place Head Coach Mike Brey watched Lykes' practice and offered him.

“Coach Brey came by to one of my practices and he told that I have received an offer from them,” he told MADEHoops. “He has been around here lately checking out some of my games and practices. They were focused on their season and he understood that I had to focus on my own. When April comes he said he will pick it up even more with my recruitment.”

There are three schools that are close to offering him next.

“Vanderbilt, Baylor and Louisville are the three schools showing me a lot of interest,” said Lykes.

Lykes looks to visit some of the schools that have been recruiting him hard and the ones that he hasn’t gotten the chance to see yet.

“I don’t have an set dates yet, but I know that I will plan on taking some visits in the next couple of weeks,” he said. “I probably will visit Villanova, Miami, Notre Dame, VCU and a couple others sometime soon.”

A lot will be coming his way this AAU season so he and his family have set a time period as to when he will cut down his list.

“My family and I have decided that we are definitely going to cut it down this summertime,” said Lykes. “They don’t want too much pressure on me as a senior, so that is one thing that I am looking forward to doing this summer.”