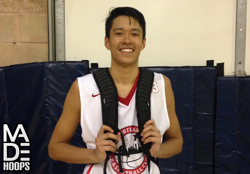 A lot of Pac-12 and WCC schools are tracking Kamaka Hepa.

Kamaka Hepa from Portland Basketball Club (OR) may have been the most intriguing prospect at the Spring Takeover yesterday. The class of 2018 forward recently moved from the state of Alaska to Jefferson, Oregon. A lot more exposure should come his way now. There were a couple of reasons why he and his family decided to move.

“I think it’s really going to help my game and my future as well,” said Hepa. “I’ll be able to see how I compare to the best competition in the nation.”

The style of play from basketball in Alaska is a lot different than it is in Oregon.

“The physicality is a lot more intense here and athleticism is on another level,” said the Alaskan native. “The tempo here is also a lot faster.”

Hepa does a lot on the floor, but finds a couple of things he does on the floor to be his best attributes.

“I think my best attribute is my versatility because I can bring the bigger guys outside and take them to the rim,” Hepa said. “If there is a little guard on me I’ll work him in the post. I would also say passing is another one of my best attributes.”

Oregon, Gonzaga, Utah, Stanford, Washington, UCLA, Notre Dame, Virginia and Miami are some of the high major schools that have expressed interest in him. He will be doing some background information on each school that is recruiting him.

“I just want to see how each school’s style of play fits me and how they will let me further my basketball career,” said Hepa.

A lot of schools in close proximity to Hepa have been making him a priority.

“Gonzaga, Utah, Stanford, Arizona and a lot of other Pac-12 and WCC schools have been in contact with my Dad the most,” he told MADEHoops.

Portland Basketball Club is in its first year of existence so Hepa wants them to start out on the right foot.

“It’s a first year team and I think it’s going to be good for us just to see where we stand with other teams,” he said. “Hopefully we will pave the way for the future generations of Portland basketball.”

Class of 2018 forward Jalen “Sticks” Smith from Team Takeover 16U had an impressive first day at the Spring Takeover. The Mount St. Joseph’s (MD) product has been adjusting to his new AAU team smoothly.

“It’s been a good experience, there is a lot of things that we need to work, but this team has a lot of potential,” he said. “We know how each other plays as well so that pays dividends.”

Smith likes to get himself going on one end of the floor and everything seems to fall into place after that.

“I start on defense first, so once I get my defense going I am able to get my offense going as well,” said the 2018 forward. “I can play on the perimeter and drive or rebound in the paint.”

Prestigious high major schools have been expressing a lot of interest in him recently.

“Syracuse, Kentucky, Arizona and Notre Dame have recently been expressing a lot of interest,” said Smith.

Smith is hearing from four programs the most at this point.

“I would say Maryland, Syracuse, Wake Forest and Villanova I hear the most from,” he told MADEHoops.com.

His most recent visit to a school was at Maryland when they played at Wisconsin. He is familiar with the school as he has been on campus multiple times.

“It was a good experience, the vibe from the fans was amazing and it pumped everyone up,” Smith said.

The reigning national champions in the Villanova Wildcats are one of the schools that have made him a priority. One attribute of their stands out to Smith.

“They told me that they would like me to work on my strength and speed,” he said. “What I like about them is that they always play ruthless no matter what the challenge is.”

Two factors will play the biggest role in his recruitment as he continues to progress with it.

“Mainly I’m looking for the academic background of the school because that is the first thing that I am worried about,” said Smith. “I am also seeing how they treat their players.” 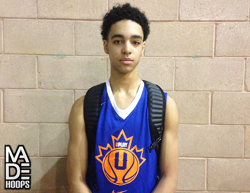 Michigan is looking to get Andrew Nembhard on campus for a visit soon.

Class of 2019 point guard Andrew Nembhard from Nike UPlay Canada has a busy week as he competed in the Jordan Brand Classic and immediately following that game went to his 16U EYBL game. He was tired, but still made sure to attend his team’s first game this AAU season.

“It was our first game this season so I had to come play and I like competing,” said Nembhard. “I had to make sure to come out and play in this one.”

Competing in a prestigious event like the Jordan Brand Classic was a special experience for Nembhard.

“It was one of the top basketball experiences of my life,” he said. “I got to compete against the top players in the world and play in an amazing atmosphere.”

Before AAU kicked off the freshman point guard has been working on two parts of his game.

“I’ve been working on my set shooting from the three point range and finishing at the basket,” he said.

He and Nike UPlay teammate R.J. Barrett have grown close in the past year. Nembhard can’t wait for what awaits them this spring and summer.

“It was a great experience last year and it should be again this year,” Nembhard said. “I hope to go far with him and the rest of the guys in Peach Jam.”

High major programs have already started to pursue the class of 2019 prospect.

Michigan has shown him the most interest thus far and have been in constant contact with his parents.

“They have been telling them to have me keep doing what I’m doing and work hard,” said the freshman point guard. “The coaches have been saying that I need to look into their campus and study what they do and how I would fit in there.”

Class of 2018 small forward Robert Woodard from the Mississippi Express made his Nike EYBL debut this weekend at the Spring Takeover. His liked his first experience on the circuit.

“It’s the first time I have been on this circuit so I like to be challenge and see what I need to work on,” said Woodard. “It’s great to play against great talent like this so I’m looking forward to it.”

He is known for having a high motor and it is something that he prides his game after.

“I just like to get after it, I don’t like being outworked and if the ball is moving I want to be on it,” he said. “I just like to be active throughout the game.”

Six schools have been recruiting the Mississippi native thus far.

“Alabama, Tennessee, Mississippi State, Baylor, LSU and Georgia are actively recruitment and have offered me as well,” he told MADE Hoops.

Even though it is early, one program has been making him a priority.

“I would say Mississippi State has been contacting me the most,” he told MADE Hoops. “They really like how I play with my teammates and how I can take over the game.”

“It was great, it was a dream of mine and it finally came true,” Woodard said. “It was great for a lot of seniors on my team and it was something I’ll never forget.”

He has set out a few goals for he and his teammates at Mississippi Express this season.

“I would like to win a couple of tournaments as well as travel to Spain with the USA team,” he said. “That’s really something that I am striving toward right now.”

A couple of factors will matter the most in a school, but one stands above the rest.

“The first thing that I am looking for is education,” said Woodard. “I also want to look into how the team operates as well. I want a team that I can click with and a coaching staff that will put me in a position to get better.”