After Issac Vann's impressive freshman year, he has decided to transfer to VCU 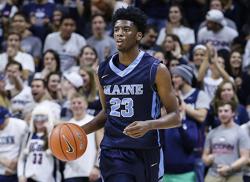 After having a standout freshman season at Maine, Issac Vann has decided to transfer to the VCU Rams. Vann had St. Joseph’s, Manhattan, George Washington, La Salle, Fordham, Duquesne and more recruiting him once he made plans to leave Maine, but after visiting VCU this past weekend his decision was made.

“When I got on onto campus I just felt the love at VCU,” he told MADEHoops. “The fans and the team were all really welcoming. I got along with the guys very well and the coaches seemed like they really wanted me. They called me every day and I just felt like I was wanted there.”

He averaged 16.4 points per game at Maine and was named to the America East All-Rookie Team. Vann showed his ability to play in transition all year long, which fits into VCU’s style of play perfectly.

“I like their style of play as they play fast and get up and down the floor quickly,” he said. “I definitely think they fit into my game well.”

VCU Head Coach Will Wade and his coaching staff have told Vann exactly what they expect out of him when he gets there.

“They want a guy that already has experience and with me sitting out a year they want me to take that time to get stronger,” said Vann. “If I do that I’ll be a guy that can contribute right away for them once I’m eligible to play.”

Assistant Coach Rasheen Davis took the lead for VCU in recruiting Vann. He and Will Wade made him a priority, which could be seen through their scheduling of his visit this past weekend.

“My UConn visit had gotten cancelled and they both were supposed to go on a recruiting trip,” Vann said. “Once they heard of the cancellation, they set my whole visit up in one day and dropped all of their plans to get me out there. That definitely showed that they cared and it became a huge factor in my decision.”