Kevin Knox had in-home visits with Kentucky, North Carolina, Duke and Florida State this past week. 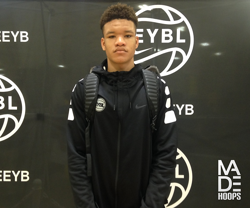 Kevin Knox has risen a great deal as a prospect in the past year.

One of the nation’s most elite class of 2017 prospects, Kevin Knox has lived up to expectations thus far in the Nike EYBL. The E1T1 United forward has averaged 22 points and 8.5 rebounds per game through six matchups. He and his teammates came out with a 79-77 win against a talented Houston Hoops team.

“It was good, that was a must win game for us,” he said. “They struggled last night so we knew they were going to come out with a little more energy so it was a big win for us.”

His coaches at E1T1 place a lot of responsibility on his shoulders and Knox is fully aware of that.

His in-home visit schedule went as follows: Kentucky last Monday, North Carolina last Tuesday, Florida State last Wednesday and Duke visited the week prior. Villanova was supposed to have an in-home visit with him last Thursday, but Knox was unable to make it due to basketball practice. Knox enjoyed every school’s in-home visit.

“Everyone was good, the coaches came in and told me their story and showed me a video of players that they want to compare me to,” said the 2017 small forward. “All visits were ten out of ten, no visits stood out, but they were all good.”

Duke has made him a priority and on their visit they made a player comparison for the class of 2017 prospect.

“They just tell and text me every day to watch some film on who they compare me to,” he said. “This year they told me to watch Brandon Ingram to try and play like him if I go there next year.”

Knox finds North Carolina’s style of play to fit into the way he plays on the floor.

Florida State Head Coach Leonard Hamilton and his staff look for Knox to follow in his Father’s footsteps and become a Seminole.

“Florida State was good, they came to watch me work out and came to my house later on that night,” he said. “They just pretty much told me that they want me to follow the legacy of my Dad and go to Florida State.”

Knox attributes his rise as a prospect to a couple of things that he did in the offseason.

“I just went back and watched a lot of film on some things that I did and need to get better at,” he said. “I went in the gym every single day and kept working on those things. There are still some things I need to work on, but as of now I’m doing pretty well.”

He looks forward to playing talented guys at his position and takes it as a challenge to show what he is made of.

“I want to play against guys like Michael Porter, Billy Preston and Jarred Vanderbilt,” Knox said. “Those are people that I am trying to compete against. They are trying to take my spot and I’m trying to prove to them that I am out here for a reason.”