Notre Dame, Villanova, Maryland, Virginia Tech and Dayton have made the cut for Darryl Morsell 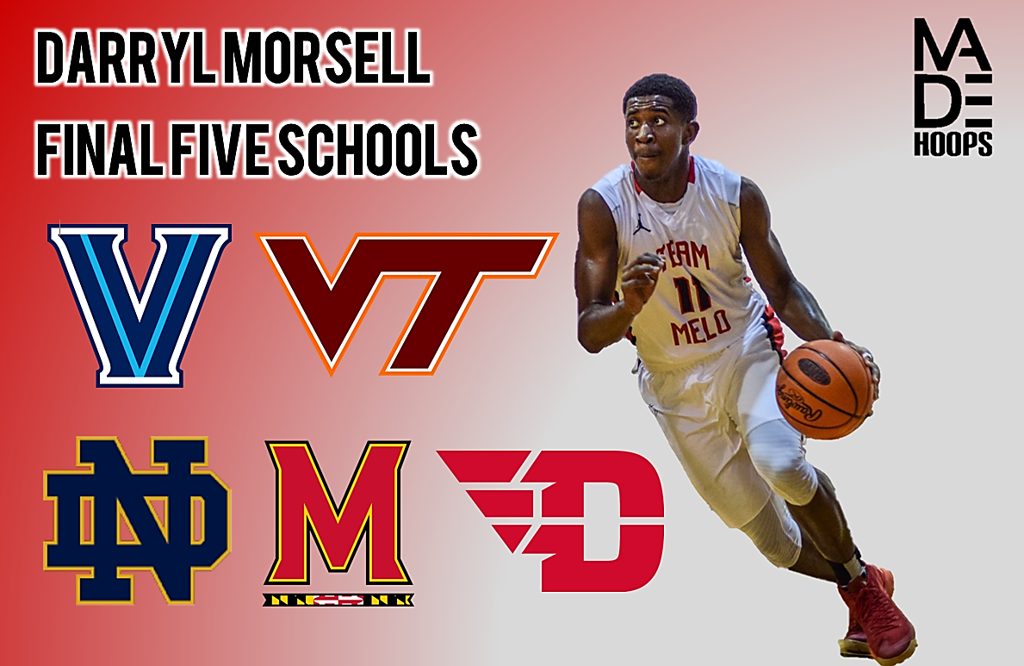 Darryl Morsell will take an official visit to Notre Dame from September 17th-18th.

Class of 2017 shooting guard on the rise Darryl Morsell has seen his recruitment take off with Team Melo this summer. When the July live period was all said and done, Morsell held multiple high major offers. The offers have continued to come in but, the Mount St. Joseph’s (MD) guard has decided to cut down his list of schools to five.

“I’ve decided to cut my list of schools down to Notre Dame, Villanova, Maryland, Virginia Tech and Dayton,” said Morsell.

He broke down what he likes in each school that remains for him.

Notre Dame: “They have been telling me that college isn’t a four year decision, but a forty year decision,” said Morsell. “Their academics are very prestigious and they did a great job putting Demetrius Jackson and Jerian Grant in the league. They compare the way they play to how I am on the floor.”

Maryland: “They are close in proximity to me and I grew up watching them,” said Morsell. “I like the relationship I have with head coach Mark Turgeon and assistant coach Bino Ranson. I’ve gotten to learn a lot about their program and I’m happy to have a strong relationship with them.”

Dayton: “They are in the A-10, which is lower than the rest of the schools on my list, but they have been telling me that I can make the league from their conference,” said Morsell. “Since March I’ve grown a close relationship with Archie Miller. John Crosby plays for them and he is like a big brother to me. Those two are recruiting me hard and everyone at Dayton has built a great winning program.”

Virginia Tech: “I like how they are up and coming,” said Morsell. “They are definitely a program on the rise. Buzz Williams got to Virginia Tech in 2014, so he is trying to change the whole culture of the program. I think if I went there, I could help steer them in the right direction.”

Villanova: “As many people know, Villanova is a great guard school,” said Morsell. “They produce a lot of talented guards and some of them go onto playing in the league. Villanova guard Phil Booth went to my high school, Mount St. Joseph’s so I know him very well. I really like their style of play and how they use their guards.”

Morsell has set an official visit and other visit plans going forward.

A timetable for his decision is still up in the air, but what he looks for in a school is not.

“I want to see where other guys land so I can help make my decision off of that,” he said. “I honestly have no timetable for my decision, but my relationship with the coaching staff, comfortability, the school’s academic background and what my role will be on the team are all factors for me.”