Trevon Duval talks the latest with his recruitment 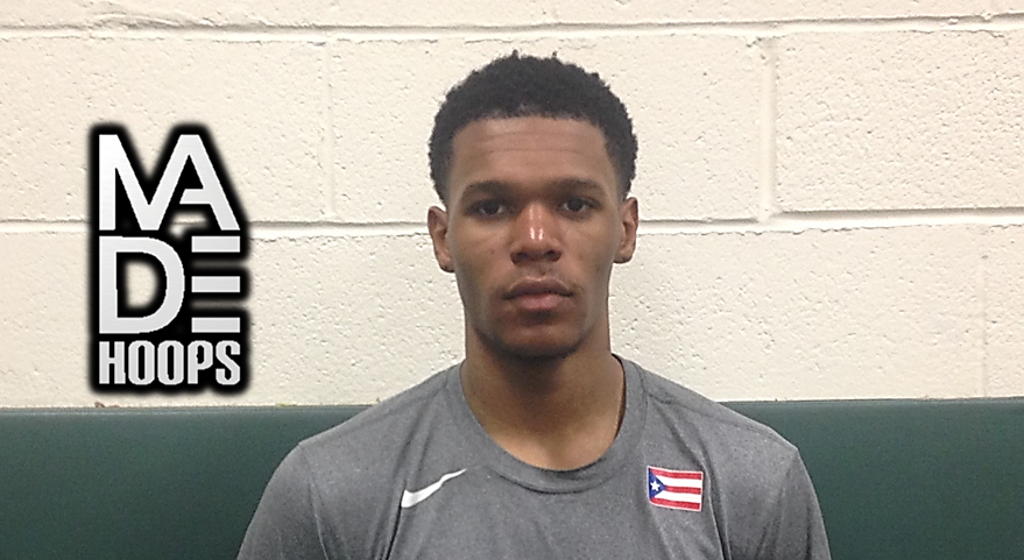 Trevon Duval made his return to New Jersey on Saturday night when he and IMG Academy went up against Our Savior New American at the Thomas F. Richel Memorial Hoopfest. Duval spent his first two years of high school at St. Benedict’s Prep in New Jersey. He was happy to get a win in his return to New Jersey and cannot wait for tomorrow’s game against The Patrick School.

“It was good playing back home, it was a lot of fun,” said Duval. “I can’t wait for tomorrow, it is a rematch because we played them in City of Palms,” he said. “It was a tough game, they were beating us pretty much the whole game so I know tomorrow is going to be a tough one. I am going to be ready to go out and play.”

He just came back from his official visit to Kansas, which he found to be a great experience.

“Kansas was great, they treated me well,” Duval said. “They showed me all of the facilities and everything that they have. I have never seen anything like that before, the environment was amazing. You could barely hear the person next to you speaking.”

Coach Bill Self and his staff have told him what his role will be if he goes with Kansas.

“Basically they need someone to come in and fill in Frank’s job,” said Duval.

When asked if Kansas will no longer be in the running if Trae Young commits there on February 16th, Duval responded with a quick, “Yes.”

The next official visit Duval has planned will be with the Duke Blue Devils.

“Next I will be visiting Duke, I will be going down there on February 8th,” he said. “I really wanted to go to the Carolina-Duke game so that is what I plan on.”

He had a chance to see them in action during a practice earlier in the season.

“It was good, I think we watched them the day before Wake Forest,” he said. “It was the first time I got to see them practice.”

During this practice, Duval got the chance to speak with Coach K.

“I talked to Coach K, I had a really good conversation with him just about basketball, the school and how Duke really is,” Duval said. “We sat down during their practice.”

Duke has given Duval a couple of key reasons why they are the best choice for him.

“They are Duke, that’s what they really say,” he said. “They need a point guard and they feel as if they have one of the biggest stages to play on. They think I can fit in there.”

The next official visit that will take place after Duke will be with the Arizona Wildcats.

“I will be going to Arizona next in late February,” Duval said. “They need a point guard badly so they want me to come in and fill that role.”

Seton Hall has been recruiting him longer than any other school on his list. This as well as other reasons have played a big part as to why they remain in his recruitment.

“They were my first offer, they are really close to home and they need a point guard also,” he said. “They fit my playing style so they have a couple qualities that I like.”

He has a very close relationship with Seton Hall guard Myles Powell. Powell has been recruiting Duval to a certain extent.

“He has been recruiting me and telling me to come and make that move, but then again he doesn’t do it too much so that it would hurt our friendship,” Duval said. “I know that Seton Hall and their coaching staff will be there tomorrow.”

Seton Hall is the closest to where Duval is originally from, which he finds to be intriguing.

“It would be pretty cool to stay close to my family, but I have to do what I have to do to get where I want to go,” he said. “So if I have to go across the country then that’s what I will do.”

He is still working on potential visit dates for both Seton Hall and Baylor. After those visits, he will have time to think about his commitment down the road.

“I really don’t know exactly when, it’s something I just have to go sit down and think about after I take all of my visits,” said Duval. “After I take my visits, I will have some type of idea of when I will make my decision.”

Going forward Duval will go into every decision he makes with a business like mindset.

“I feel as if a lot of my decisions from now on are business decisions just with my image and everything that ties into that,” he said.