The young ones got after it again in PA 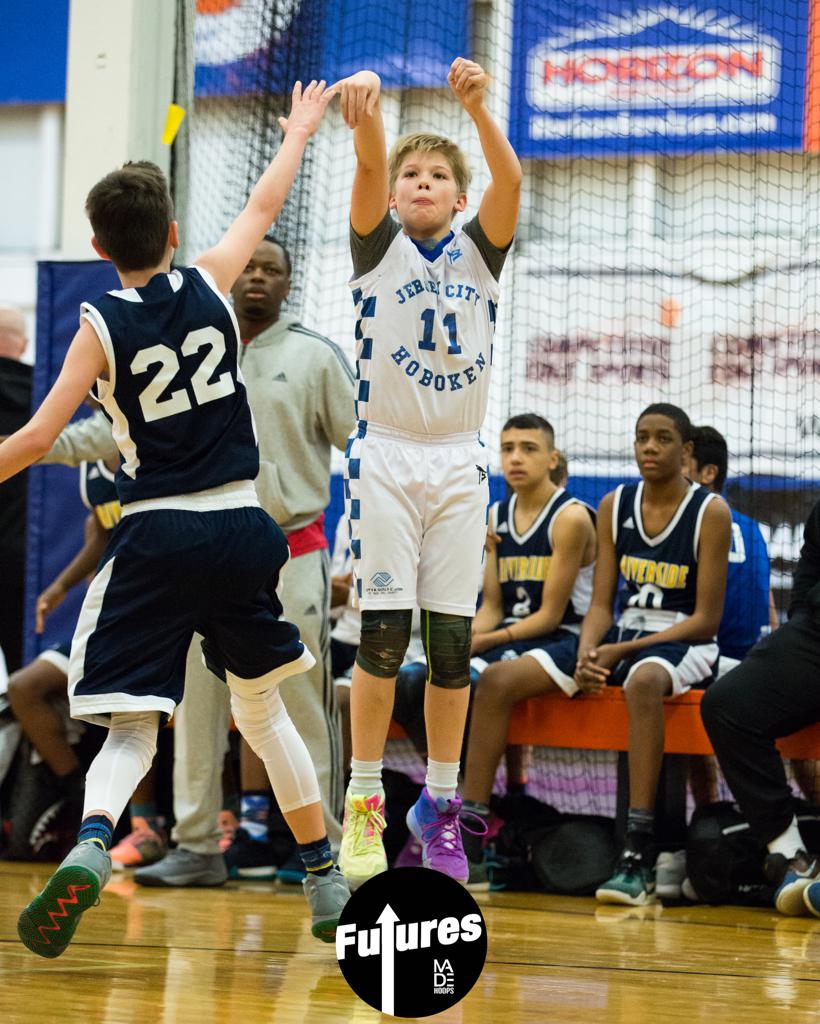 The rematch of New York vs. New Jersey was sure to be satisfying, as these two teams competed at a high level against each other in Springfield, Mass back in January. With Jersey City coming in the reigning champions, Riverside had their eyes set on victory.

As the game started, the lead fluctuated back and forth between the two teams. Jayden Ramirez of Riverside sparked a 12-point run with his keen ability to attack the basket, as well as his crafty passes. Jaylen Mayo of Jersey City was a defensive force in the paint, blocking several shots out of bounds which kept Jersey City alive. Jack Bailey chipped in 4 first half points to give Riverside the halftime lead by 11 points.

In the second half, Jersey City was sparked by Jaylen Mayo yet again, and he also received some help from Nico Pena.  Even so, the two came up just short in the end, with the final score being 44-40 in favor of Riverside.

Jersey City was led by Mayo with 11 points, while Jayden Ramriez tallied 10 points for Riverside.

The Battle for Canada and bragging rights became the theme as emotions were high for this 9 a.m. matchup.

UPlay Holton came out the gate playing behind the leadership of Eshon, who hit back to back triples from college distance.  He would finish with10 first half points, and guide his UPlay Holton club to an 8-point halftime lead.

In the second half, UPlay Canada’s Zion & Jacob charged a comeback that helped their team erase the halftime deficit; both combined for 25 second half points. Thomas Vallincourt scored back to back post baskets closing the game, giving UPlay Canada the 20-point  come from behind victory over UPlay Holton and the bragging rights for now.

UPlay Holton was lead by Eshon who scored 17 points. UPlay Canada had several players in double digits; Zion assisted with 12 points, Reggie had 10 points, and Jacob Theodosiou led all scores with 19 points to help his team advance further into the day.

Delaware vs. Philadelphia was a matchup between two neighboring states that is always a treat to see.

Team Fidonce, came out hot and heavy early and never looked back. Ahmad Noell, Kafiq Meyers and Jamar Sabree led Fidonce to a 15-point halftime lead. The three combined for 22 first half points.

The second half saw Team Fidonce seal the game and first round victory behind Sabree’s hot hand and three-point shooting. Team Fidonce easily won the matchup 61-38.

Team Delaware was led by Foster’s 11 points. Fidonce had three players in double digits. Jamar Sabree scored 13 points, Kafiq Meyers added in 11 points, and Ahmad Noell with a team-high 15 points - all helping Fidonce advance to the semifinal round.

Team Delaware showed a lot of fight and promise, and will surely be back to claim their stake in MADE Hoops competition in the future.  Making it out of pool play isn't easy in itself, and Team Delaware definitely showed that they could swim in the mix of talented young teams under the MADE ringer. 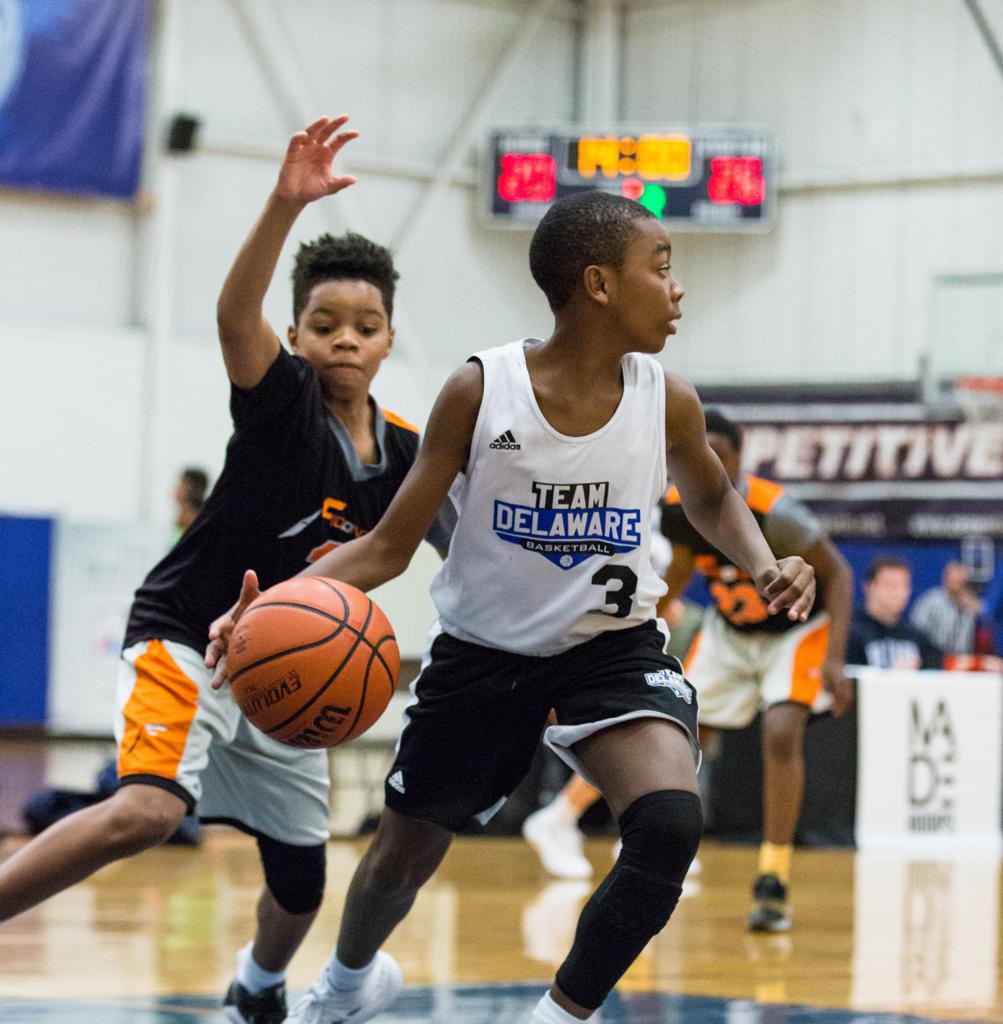 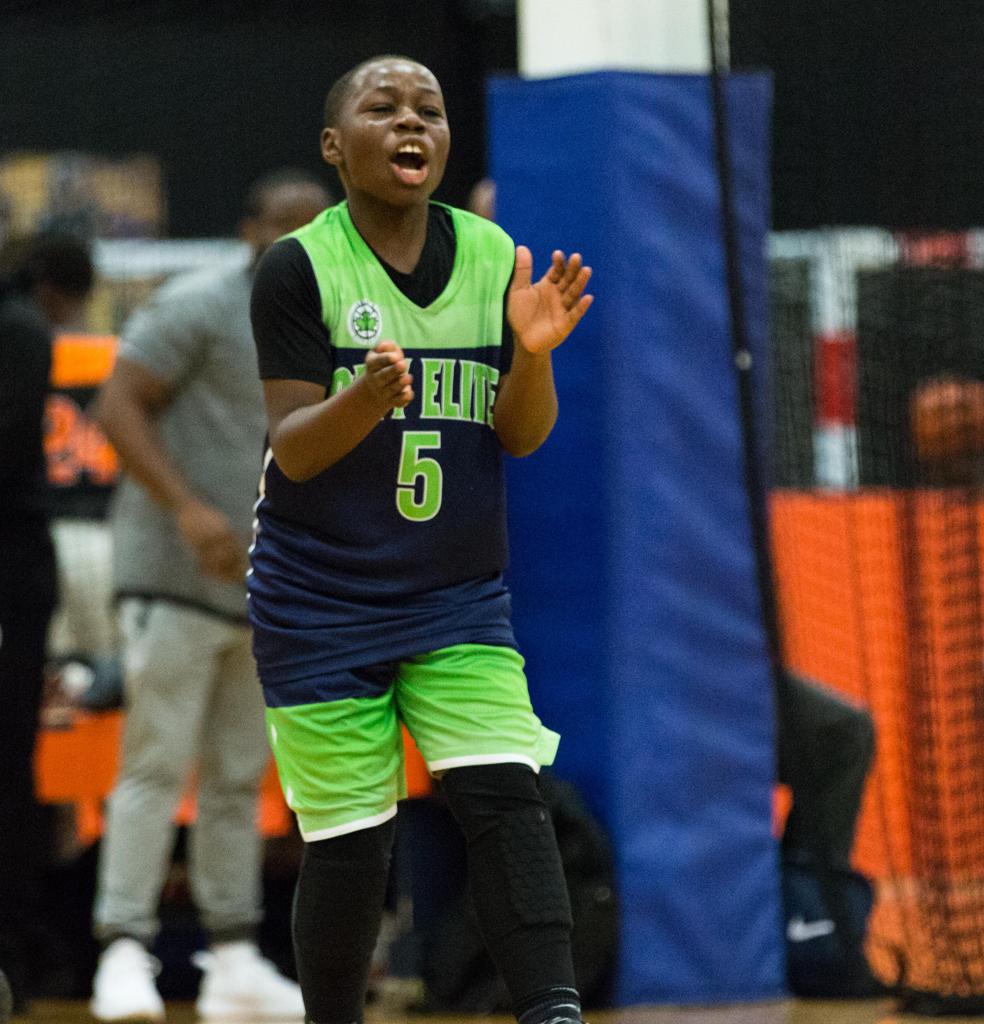 Canada came to play, and had great representation for their country this weekend. Another battle between two teams from the 6 was sure to be epic seeing how both team matched up well on paper and desperately wished to reach the Championship Game.

As the second half began, Theodosiou continued where he left off, scoring the first seven points for UPlay. Kundai Mawoko caught fire and scored 14 second half points for Toronto City Elite which kept them close to tasting victory.  Mawoko finished with 19 points and Ramos assisted with 15 points of his own for TCE.  Despite their effort, UPlay refused to be denied a chance to win it all.  The look in Theodosiou's eyes said it all as he dominated the game from beginning to end, and put his stamp on it. Jacob completed the game with 35 points, giving UPlay the victory 59-55 over Toronto City Elite and advancing his squad to the Championship for the second straight Futures session.

Team Fidonce continued making a name for themselves and their program this weekend with their astonishing play overall. As for the Riverside Hawks, there not new to competing on Championship Sunday.

As the matchup started, Riverside was carried collectively by the whole unit with scoring from multiple players. Jack Bailey scored 6 first half points, while Gus and Jayden Ramriez scored 5 points a piece.

For Fidonce, Ahmad Noell carried the load in the first half, scoring 16 points. He would continue scoring buckets in the second half, giving Riverside fits. Noell scored 13 second half points, completing the game with 29 total points for Team Fidonce.

Riverside was led behind Gus' 14 points, but his push wasn’t enough as New York came up just short against Philadelphia in this semifinal matchup 53-51.  It was a hard fought game that could've went either way, but the impact of Ahmad Noell tipped the scale in favor of Fidonce and carried them into the Championship Game. 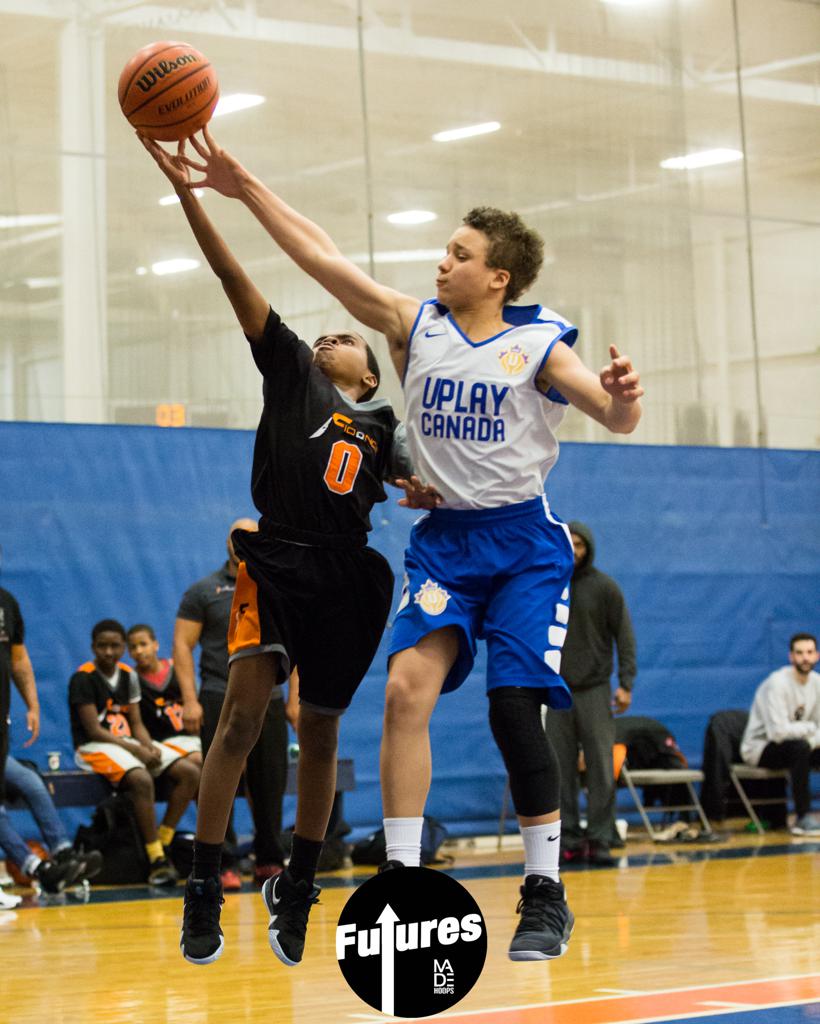 The final game of the day had a great tone to it!  For UPlay, it was their second trip to the Championship round, as they faced off against Jersey City Boys & Girls Club in the Springfield session and came up short.  For Fidonce, they were focused on defending home turf, and were dancing and enjoying pre game tunes played by DJ Abrin Sample.

To start the first half, Fidonce jumped out to an early lead led by baskets from Ahmad Noell & Kafiq Meyers. The guard duo displayed their ability to control the pace, as well as get to the rim for floaters and layups, both combining for 19 first half points. Fidonce took an early 12-point lead, causing UPlay to take there first timeout. After being instructed in the huddle, UPlay came out with more focus and more determination. Jacob Theodosiou turned it on and started pouring in the buckets after a set of converted free throws. Theodosiou completed the first half with 21 first half points, cutting Canada UPlay’s first half deficit to just two points, 34-36. Time and time again he's proved to be the spark plug and leader of this team, and it really showed in this game early when it seemed like the first half was getting away from the boys up north.

In the second half both coaches told their teams, “Leave it all on the floor!” As action begun, early baskets from William Carney, Ahmad Noell & Kafiq Meyers gave Team Fidonce another lead. UPlay then made some needed adjustments on the floor and was sparked by the much need role play of Reggie, Zion & Rahjon. Jacob Theodosiou wouldn't miss a beat either, as he started back up after his 21 point first half, scoring 13 second half points. Late game defense from UPlay’s Thomas Vailloncourt & Reggie helped seal the championship victory for UPlay.  They were able to get blocks and steals, forcing a succession of turnovers from Fidonce which enabled them to run down on the other end and finish open-court layups.  Jacob had a few AND 1s down the stretch, which got the crowd and his team into it, and got him in his mamba mode.  He refused to go home empty handed this time around.

Fidonce was led behind Kafiq Meyers' 22 points. Ahmad Noell & William Carney both assisted with 10 points each in the tough loss.

For the winning side, Jacob Theodosiou led all scorers with 34 points & Zion chipped in with 10 points.  They were able to hang tough, whether the opposition, and see it through this time, as they would be crowned Futures 6th Champions in their second attempt.  Much deserved, and look for them to stay hungry and involved, as they will definitely be attending MADE Hoops Midwest Mania in June in Indianapolis. 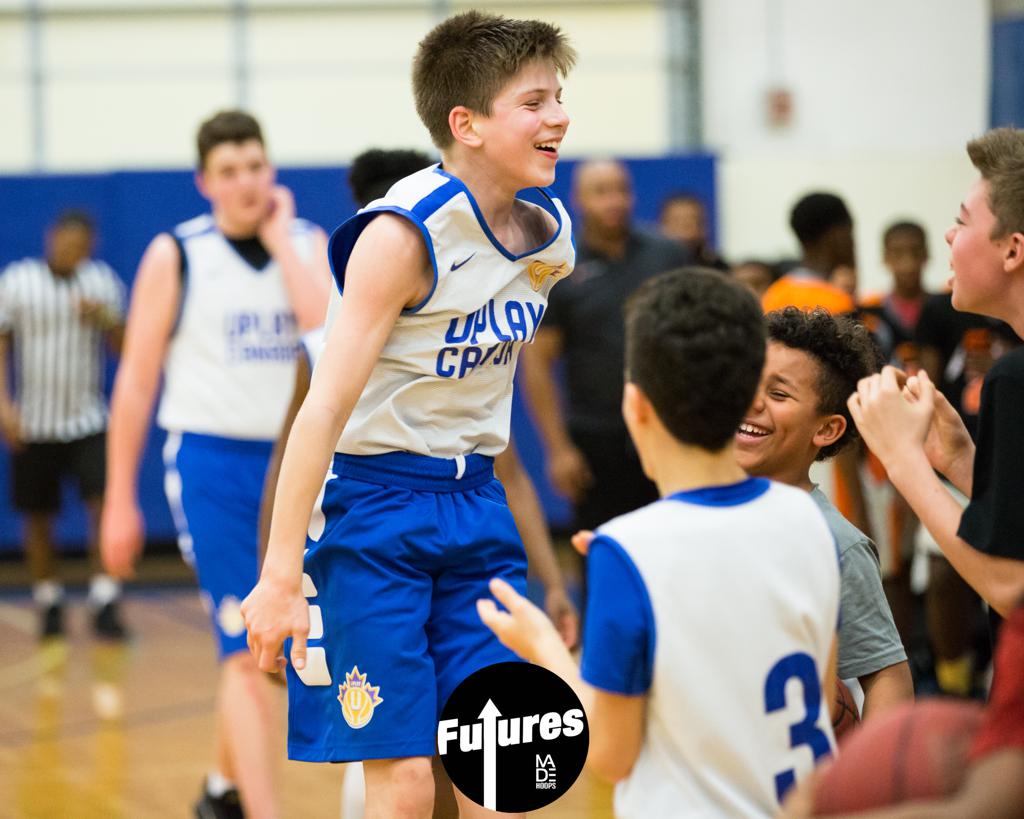 After recently returning from a minor hand injury, UPlay’s Jacob Theodosiou set the tempo for the weekend scoring 33 points and dishing out 8 assist in crafty fashion in his first game of the weekend. Theodosiou was fluent from 3, nailing 5-8 of his shots from beyond the arc. “Buckets Come Easy” lives up to his nickname every time he steps in between the lines.

Team Delaware has a very versatile forward in Amir Williams. His ability to handle the ball after grabbing a defensive rebound is pretty impressive. Williams led his team in there morning outing with 12 points, 9 rebounds and 4 steals.

Mahmood’s paint dominance changed the flow of the game for Toronto as he led charge with 17 points & 19 rebounds. He was definitely a tough paint presence all weekend long, and very notable and praiseworthy.

Toronto has a nifty combo guard in Pennicott. On many possessions, Pennicott was able to create shots off the dribble for himself, as well as create shots for his teammates. He had 13 points & 5 assist in his teams' win versus Team Durant.

Perkins was percolating this morning with his hesi, tween, snatch... buckets. His 19-point morning outing was special because of his ability to create so much space for his jump shot and driving lanes. Perkins has all the tools of becoming extremely special, as he's a very advanced offensive player for a 6th Grader.  Perkins is definitely the future.

Nico Pena jumped for joy as he sank the game winning three-point shot to give his Jersey City team a one-point victory over Toronto City Elite. Pena completed the game with 15 points, and showed he can rise in the moment as a tough competitor,