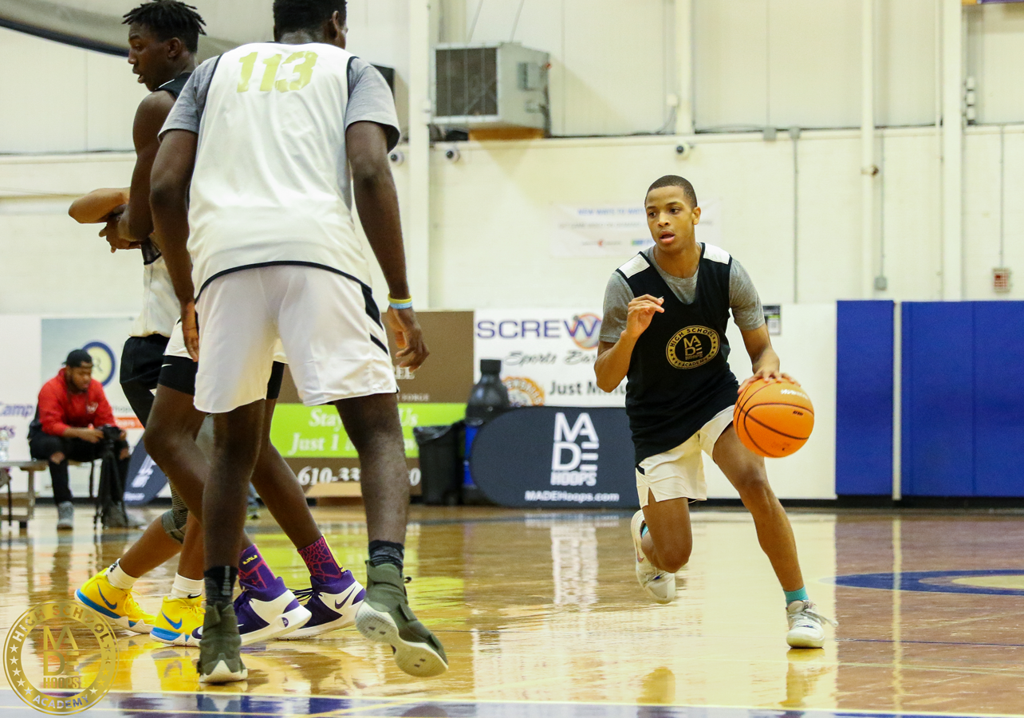 Before taking part in our inaugural MADE Hoops High School Academy Camp over the weekend, First Love Christian Academy (PA) 6-foot point guard Isaiah Wilson took a trip to visit Drexel on Friday, and left campus with an offer in his hands, adding to a list of offers that includes Kent State, Rhode Island, St. Peter's & Winthrop. The 6-footer took his momentum into the camp, where he showed off impressive end-to-end speed and an impressive feel for the game. With ability to score anywhere on the floor, he has excellent moment heading into his junior season.

Brayon Freeman, 2021 G, Bishop O'Connell High School (VA): It's not hard to find guys who THINK they are effective high scoring point guards, but it is hard to find prospects who actually are. The 6'1" guard can not only effectively run his team, but he's consistently shown over the past two years that he's one of the better scoring guards in his class, especially when his perimeter jumper shot is firing on all cylinders.

Chuck Harris, 2022 G, Gonzaga College High School (DC): The 6'3' guard gets the job done every time out, simply put. While his game isn't necessarily flashy, he's always productive and goes to work every time he hits the floor. He's a two-way prospect who can score on all three levels while providing value on the defensive end as well.

Chace Davis, 2021 G, St. Andrew's Episcopal School (MD): The strong 6'2" point guard was one of the more offensively sound prospects in the gym over the weekend. One aspect of his game that stands out among the rest is his jump shot, which not only has good mechanics, but also has great lift, which he used to knock down a deep overtime game winner in one of his five-on-five games on Sunday.

Zion Russell, 2021 G, Georgetown Prep School (MD): The improvements that the 6'1" point guard continues to make are very impressive. His athleticism and burst are staples of his game, but his decision making and scoring ability around the rim are also impressive. He loves to compete and doesn't shy away from difficult defensive matchups.

Jaylen Blakes, 2021 G, Blair Academy (NJ): An athletic 6'2" guard that loves to attack defenses, he's shown considerable growth in his game over the past 18 months. He's able to create his own shot off-the-dribble with more consistency these days, which makes him a dangerous offensive player. He also plays intense on-ball defense, creating turnovers quite often.

Quadry Adams, 2020 G, Bishop George Ahr High School (NJ): It was our first viewing of the late blooming guard, who has grown several inches over the past two years, and looks like he still has more growth left in him. An athletic 6'3" prospect with nice mechanics on his perimeter jumper, he was a solid scoring option all weekend long. Expect his recruitment to heat up this winter.

Jalen Warley, 2021 G, Westtown School (PA): A growth spurt over the summer has positioned the 6'3"+ guard for a big winter with his nationally acclaimed high school team. A crafty scorer with improving lateral quickness and good court vision, he was one of the breakout performers of the camp. Expect a big AAU season as well.

Elijah Jamison, 2021 G, Louisburg High School (NC): As far as physical guards go, the 6'3" scorer was impressive in his attacking style at the camp. He uses his frame well in order to get to the basket, and showed that he can also hit perimeter shots when necessary in order to keep the defense honest.

Jameel Brown, 2022 G, The Haverford School (PA): Coming off a trip to Colorado Springs for the USA Basketball U16 Minicamp, the 6'3" combo guard looked refreshed and confident, showing off his scoring skills at camp on Saturday. The beauty of his game is in his ability to slide seamlessly between the point guard and shooting guard positions.

Isaiah Hill, 2021 G, Union Catholic High School (NJ): A bouncy 6'3" guard who can play either backcourt position, he has started to pick up steam as one of the most talented guard prospects in the region in his class. As he commits more to the defensive end of the floor, he'll continue to see his stock improve.

Kyle Hicks, 2022 G, The Fessenden School (MA): The athletic 6'3" combo guard continues to show impressive scoring ability, with skills to play both on or off the ball. His length and athleticism are plus aspects of his game, and he shows nice instincts on the defensive end.

Chris Moncrief, 2022 WG, The Kiski School (PA): One of the pleasant young surprises of the camp was the 14 year old guard, making the trip to camp from Pittsburgh, as he looked like the next rising star from the city. At 6'2" with an excellent feel for the game, the confident guard had some nice scoring moments at camp. Expect him to continue to sprout and evolve.